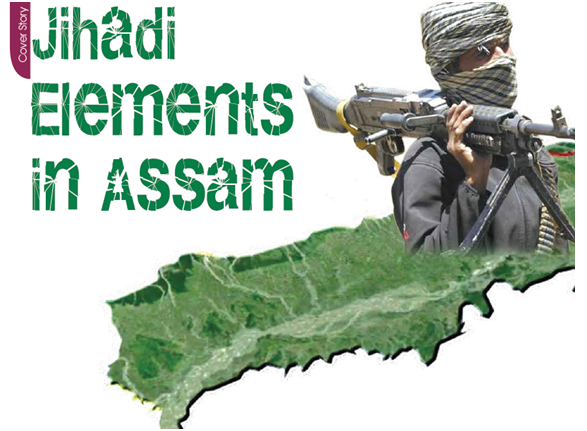 Of all the states in the Northeast India, Assam is the most crisis-ridden state. It is not an understatement, rather a reality based on a prolonged observation.  Because there are many and varied problems in the state.  But as some major political problems still remain unsolved, a complete peace in the easternmost is as elusive as it was in Jammu and Kashmir till before the abrogation of Article 370 and Article 35 A, aimed at ending the decades-old militancy movement in the valley.

But one important question that must be at the back of an inquisitive mind is: Will an enduring peace in the immediate future ever revert to Assam? This depends largely on resolving the State’s few vexed political problems which periodically threaten to destabilize it. However, one such issue that has been afflicting the people over a pretty long period of time is the growing activities of the Islamic militants/ jihadi elements in the state. There are media reports which suggest that these operatives are not just engaged in recruiting and training local Muslim youths in the art of manufacture and use of sophisticated arms and ammunition but also indoctrinating them with jihadi tenets.

The recent arrest of seven persons by the Assam Police in Nalbari and Barpeta districts of lower Assam, before Independence Day, for their alleged links with Jamaat-ul-Mujahideen Bangladesh (JMB), an Islamic terror organisation operating from Bangladesh, has brought into sharp focus the fact that such fundamentalist elements are not merely working quite assiduously to set up, consolidate and spread a terror network across the state but also imparting training to the Muslim youths in the use of sophisticated weapons and making of bombs. According to a police source, three of them who were arrested on August 3 last are identified as Mustafizur Rahman of Sarthebari in Barpeta district, and Safiqul Islam and Danish Ali of Nalbari district. Notably, one of them, Mustafizur hails from the same village from where Sahanur Alam, one of the prime accused was arrested in an accidental blast incident in Burdwan in West Bengal in December 2014. Since that time, the activities of the JMB came to light, more than 500 members of the JMB were arrested, and, most of them were from lower Assam districts. In September 2015, a total of about 30 people were arrested in connection with the JMB module.

It will not be out of context to note here that the cadres and linkmen who reportedly enjoyed huge funding from Bangladesh and Pakistan are alleged to have engaged in recruitment and training in almost all the lower Assam districts, such as Nalbari, Barpeta, Chirang, Kokrajhar, Goalpara and Dhubri.  It is the members of this Islamic fundamentalist group who reportedly carried out attack on the indigenous Bodo people after some people from the immigrant Muslim community were allegedly killed by the home-grown militant outfit National Democratic Front of Bodoland (NDFB). A large number of Bodo tribal people were rendered homeless and some were killed in a large-scale flare-up that ensued in Kokrajhar in 2012, with an accusing finger raised at the JMB.

As the JMB activists are hell-bent upon doing so, as revealed from Intelligence inputs, there is immediate need for a full-proof robust intelligence mechanism in place to deal with the threats.

Imparting training and recruiting radicalized youths in Assam is supposedly not a tall order for any trans-national or Islamic fundamentalist terror group, not to speak of the JMB, for furthering their sinister agenda in the region.  With Assam having been strategically-located with the long and porous about 61 km border with Bangladesh, and the strong presence of Muslim populace in the state, that makes cross-border movement of radicals easier, it should not throw up any surprise if they are keen to spread their tentacles and consolidate their base in the state.