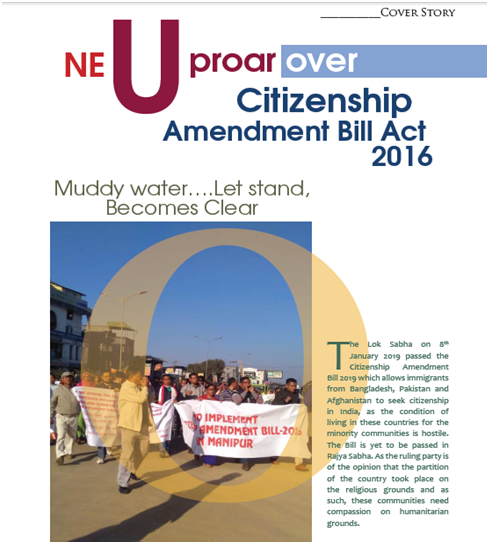 The Lok Sabha on 8th January 2019 passed the Citizenship Amendment Bill 2019 which allows immigrants from Bangladesh, Pakistan and Afghanistan to seek citizenship in India, as the condition of living in these countries for the minority’s communities is hostile. The Bill is yet to passed in Rajya Sabha. This Bill has been brought, as the ruling party is of the opinion that the partition of the country took place on the religion ground and as such, these communities need compassion on humanitarian grounds.

This Bill has also been endorsed by Meghalaya High Court Justice Shri Sudip Ranjan Sen who in his judgment justified the painful conditions of minorities’ living in these countries. The Bill has received wide spread protest in North East Region which is already in the grip of immigrant problems.

The Bharatiya Janata Party (BJP) has lost its ruling ally i.e. the Asom Gana Parishad (AGP), which has left the National Democratic Alliance (NDA), while former Chief Minister of Arunachal Pradesh Mr. Genong Apang resign from party and form his own regional party. In Meghalaya the National People’s Party (NPP) which is also partner of NDA has opted rejected the Bill.

The two School of thoughts which are working and creating political ripples in the North East Region.

The first school of thought is, that if the Bill is pass, it will open a Pandora box and would encourage minority communities to migrate to North East Region which will affect the indigenous people with the culture, languages, and tradition. It also feared that if this Bill is implemented than the indigenous people of the region will become minority in their own State. The agitators also complained that, India is secular country and act where Muslims are debarred from this Bill cannot be accepted.

The second school of thought is that India was divided on religion ground, Pakistan declared itself as Muslims country, where as India did not specify anything of religion in the constitution, later on, the word ‘Secularism’ was added in the Constitution through Amendment of the Constitution. Further the condition of these minorities in these countries is extremely painful which has been substantiated time and again.   In such circumstances India has no option but to accept them as citizen of India.

The Home Minister of India Shri Rajnath Singh categorically stated that the burden of these citizens will not be borne by the North East alone. They will be spread to the length and breadth of the country, further by implementing clause 6 of Assam Accord 1985, the Government is guaranteeing the preservation of local indigenous culture, language and tradition. The Government has also confirmed that the various District Council of North East Region will be directly funded by the Government of India and as such would empower them to work more effectively to preserve their identity. However, the election 2019 is very near where both Congress and BJP are trying to polarize the vote of majority communities, that has also given a scope to the various NGO’s, Political Parties, Student Bodies to go for agitation and gain mileage in the upcoming 2019 Lok Sabha Elections. The Bharatiya Janata Party (BJP) might be a looser in number of seats in the North East Region but may gain elsewhere, where as regional party might open their accounts in the 2019 Election. The political push and pull will only benefit our great politician and it is the common citizen who will again face the music of inconvenience.

Honourabe Justice of Meghalaya High Court Shri Sudip Ranjan Senalso commented in a case, Shri. Amon Rana vs State of Meghalaya & Ors on 10th January 2018.  As we all know that India was one of the largest countries in the world and there was no concept of Pakistan, Bangladesh and Afghanistan. They were in one country and was commanded by Hindu Kingdom but thereafter the Mughal came to India and captured the different parts of India and started ruling the country and at that point of time many conversion took place by force. Thereafter, the English people entered India in the name of East India Company and started ruling over India and were torturing the Indians so ultimately the independence movement started and India got its independence in the year 1947 and India was divided into two countries; one was Pakistan and the other was India. It is an undisputed fact that at the time of partition, lakhs and lakhs of Sikhs and Hindus were killed, tortured and raped and forced them to leave their forefather’s property and compelled them to enter India to save their lives and dignity. Pakistan declared themselves as an Islamic country and India since was divided on the basis of religion should have also been declared as a Hindu country but it remained as a secular country. Even today, in Pakistan, Bangladesh and Afghanistan, the Hindus, Sikhs, Jains, Buddhists, Christians, Parsis, Khasis, Jaintias and Garos are tortured and they have no place to go and those Hindus who entered India during partition are still considered as foreigners, which in my understanding is highly illogical, illegal and against the principle of natural justice. I have read the book written by Tathagata Roy, the present Governor of Meghalaya called “My People Uprooted: The Exodus of Hindus from East Pakistan and Bangladesh”.

To read the further article please get your copy of Eastern Panorama February issue @http://www.magzter.com/IN/Hill-Publications/Eastern-Panorama/News/ or mail to contact @easternpanorama.in