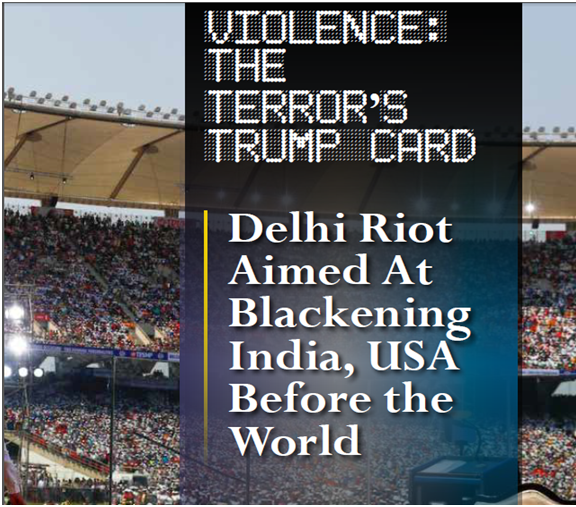 The anti-India international quarters may have been brewing up their evil game of shadow fighting for decades together but it never was so blatant as happened during the India visit of the US President Donald Trump and his wife Melania Trump.

Irked at the bonhomie shown towards India by the USA, such pro-Jihadist international quarters used their traditional trump-card during the Trump-visit by sparking off the communal violence using the CAA as an alibi in the streets of Delhi. Donald Trump, the First Lady Melania, daughter Ivanka Trump and her husband Jared Kushner came to India during a 36-hour official tour during which several business deals including the purchase of defence hardware were inked between India and USA.

The narratives of Trump directed towards his strong opposition to acts of Islamic terror against India sponsored by a particular nation further found its expression in unleashing violence by that country not only to malign India over the issue of CAA but also to express their wrath against Trump who opposes the Islamic terrorism.

The National Investigation Agency of India (NIA) found direct involvement of different terror groups including the Jamatul Mujahideen Bangladesh, Jaish-e-Muhammad, Students Islamic Movement of India and Popular Front of India, among others.

These Islamic groups are very strongly opposed to Trump and found his visit to India an excellent opportunity to flex their muscles. Their acts to foment communal passion during this historic visit clearly indicated they aimed at maligning Trump and their traditional nemesis Prime Minister Narendra Modi of India.

The paternal analysis of Delhi riots clearly testify more of widening the Hindu-Muslim communal rift that an act of raising slogans against the CAA.

The nature of violence, its dimension and efforts by certain Indian political parties to hijack the issue are clear indications that the “infiltrators” were more interested in creating troubles than trying to find out solution to their anti-CAA anger.

If the protesters were really interested in making their arguments and points heard, they could have moved to the court or demanded for an all political party meeting.

But they hurled bombs, used gun-shots, arson, loot and all other forms of violence showed that they were “well organized.” The fact that violence was “well organized” became evident when residents in certain areas of Delhi threw acids on the police force.

This proves the conspiracy theory as the CAA protesters wanted to show to the world that Trump is hobnobbing with Modi whose ruling party brought the CAA.

The entire world knows Trump banned visa to certain section of people who belong to Muslim nations and also knows the fact that he always fights against the Islamic terrorism.

They were also irked on Trump as he did not make any reference to Jammu and Kashmir issue ending status of Azad Kashmir by the Modi Government.

The ultra-violent shape of Delhi riots resulting in the death of scores of people came immediately after the announcement by the Sub-continent branch of Islamic State (mostly operating from Jammu and Kashmir) that the best path of Indian Muslims is to move for Jihad to establish a caliphate.

The Islamic State announced through its web-magazine that Trump-Modi duo have betrayed the Muslims of India and time has ripened when the Muslims must fight for replacing Indian democracy by a Sharia-based Caliphate. The violent protesters against CAA now cannot hide their “international terror connection.”

Who Forbade Protesters to Protest Peacefully?

India is a free democracy not a closed one like some of our neighbouring countries. It is a secular nation with no state religion like Pakistan where blasphemy means a capital punishment.

Why did the CAA protesters went on war path brandishing pistols, hurling bombs and attacking civil areas in Delhi?

If it was against the CAA, why did they added strong communal colour to it and that too when the US President was on an official visit to India?

Can any Indian (other than an anti-Indian) do it to convey wrong message to the world or malign a foreign dignitary? We know the answers to these questions are emphatic No’s but the protesters did it.

The suspicion that these acts were “prompted” by certain foreign nations and international terror groups gets enlarged when we look at the timing of these riots in Delhi.

To substantiate our argument, let us have a look at the two-month long protests at Shaheen Bagh in Delhi against the CAA. Occasional violence might have been there but it burst out of all proportions during the state visit of the US President.

Such violence cannot spring up suddenly or out of no external prompting. It is quite clear the protesters were more interested in tarnishing the image of India before the world during Trump’s visit than finding a solution to the CAA.