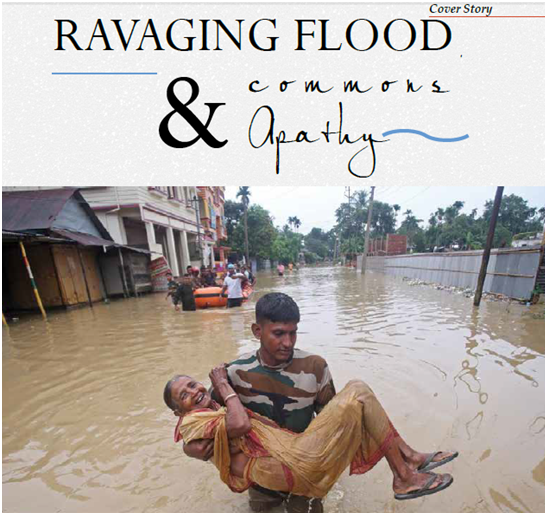 What is being dealt with here is no other than the perennial floods in Assam. Though already hackneyed in the media, the issue has these days been the front-page headline stories in most newspapers of the state not because that a sustainable, logistic solution for easing the severity and devastations of the chronic floods has been troubling the resource-rich but fund-deficit state over the past few decades is found out but because that as in the previous year, this time too, it has wreaked havoc with its innumerable hapless villagers, particularly those inhabiting riverine and low-lying flood-prone areas with unfailing regularity leaving behind a trail of large-scale destructions. Since the wide-spread ravages triggered by the recurring floods is a periodic occurrence in the state, flood-related spade work such as repairing or constructing embankments, bridges, culverts, roads etc; where necessary, during pre-monsoon period every year on the part of the government is a sin qua non as it can go a long way in lessening the severity of the disaster and mitigating the sufferings of the flood-affected people. It has been reported in the media that the government directed the water resources department to complete the exercise in the form of building up basic infrastructure such as embankments on riverbanks by March 31 as part of flood-control measures, evidently given the recurring and devastating nature of floods.  Had the work been done on time, the flood situation did not turn grim in the state, as it has during the all three consecutive waves of deluge, and, resultantly, the villagers in flood-prone areas in particular have suffered grievously.

Arguably, around this time of the current year, Assam has experienced three waves of floods. The first wave hits the state in May-end, in the pre-monsoon period while the second one is caused by the incessant rainfall on June 23, 2020.  Both of them are equally ravaging. No wonder, so is the third wave in nature. Candidly speaking, at the time of writing this piece only the other day in relation to the chronic flood, depressingly, the state is in the grip of the current wave of floods. The flood situation, therefore, remains alarming, with around 40 lakh people affected in 27 out of 33 districts, while as many as 71 people lost their lives.

To say another way:

·         Surging floodwaters have submerged vast tracts of settlement, forcing the affected people to take shelter in makeshift relief camps, 711 in number, that are reportedly inadequate to meet the needs of a huge number of flood-affected families.

·         According to the Assam State Disaster Management Authority (ASDMA), as many as 79 animals in the Kaziranga National Park (KNP), and 121 others are rescued so far.

·         Reportedly, about 80 per cent of Kaziranga’s total mass area is now under floodwater, though earlier over 95% of its area, according to the Park Director; P. Shivakumar reeling under its impact.

As per latest report, in the Northeastern Indian state of Assam, over 2.75 million people have been displaced by three waves of floods since May, according to a state government official.  "The flood situation remains critical with most of the rivers flowing menacingly above the danger mark," Assam water resources Minister Keshab Mahanta. Some 79 people have died in the state. Authorities said the floods have also killed more than 100 animals in Assam's Kaziranga National Park, home to an estimated 2,500 rare one-horned rhinos.

The all important question that arises in a curious mind is why Assam is plagued by ravaging floods annually. A close study of the recent history of floods in the state is what helps one to have a feeling for factors why Assam suffers severe flooding per year. Actually, the main reason for it is the deposition of vast amount of sediment that comes from Tibet where the river Brahmaputra originates. When the river enters Assam it piles up enormous amounts of this silt which leads to erosion and floods in the state. This apart, there are many factors involved – heavy rainfall in the catchment areas of the upstream of the Brahmaputra basin during the monsoon, ad hoc and interim nature of embankments plus other contributing factors – deforestation, population growth in catchment areas also leading to higher sedimentation, which in turn results in rise of river-bed. All these roll into one and lead to high floods, as they do at present in Assam. Indeed, this time one of the prime reasons for the ravaging floods in the state seems to be breach in embankments on riverbanks.

There are reportedly a total of 423 embankments across the state. With 70% of them being ad hoc, unscientific and crossing life span, they as the existing flood-control mechanism are unable to withstand the growing fury of damaging floods following many of them being breached along with a number of roads, bridges, culverts etc; at many places , causing panic among the people in Kaligaon, for example.

There is a section of people who often do accuse on the social media or the public platforms of the state government’s alleged procrastination in evolving out a well-considered, holistic flood-management mechanism. But it is not true. The government has initiated measures, though short-term, to mitigate the sufferings of the affected people. For instance, it establishes vital infrastructure such as embankments, roads, bridges, culverts etc. Beyond all these, doing anything long-term which is the immediate need is not possible, for it entails huge amount of money which Assam as a fund-deficit state unless it receives the Centre’s adequate fund for the purpose. The State Government considers dredging up or digging up the riverbed to make the river Brahmaputra deeper. But the experts advise against this because it will not only lead to deposition of slit following year but be very expensive exercise as well.