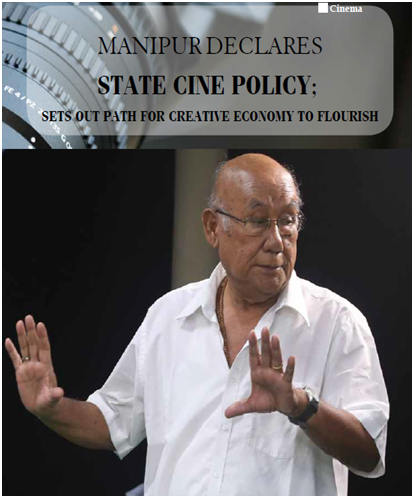 As the saying goes ‘better later than never’, Manipur, which boasts of a vibrant film production, will soon see a leap in the growth of Manipur Cinema as a creative economy with the government of Manipur, finally notifying the much awaited, ‘the Manipur State Cine Policy 2020’, bringing it into being in the state to the delight and relief of the state’s film fraternity.

“This is good news for Manipuri Cinema. The ladder to reach the goal of an identity and footprint around the world has been made,” said the grand old master of Manipuri cinema, Aribam Syam Sharma.

“It has long been the hope and aspiration of the community. Finally, the government has acknowledged Manipuri cinema with this policy.  This is a great start,” added Aribam Syam whose films ‘Imagee Ningthem’ and ‘Ishanou’ put Manipur cinema into the world map with critical acclaims at Nante and Cannes festivals respectively.

Former Art & Culture Commissioner and retired IAS officer, RK Nimai Singh who played a significant role in drafting the policy heaved a sigh of relief upon the notification. “It’s good that it has been notified at last after bureaucratic bungling had delayed it for nearly four years,” said RK Nimai.

At first glance, the policy reveals a thrust to formalize film studies by introducing cinema as a subject and mooting for a department of film studies in universities and upgrading the state owned ‘Manipur State Film and Television Institute’ to an academy of higher studies on cinema. These aspects of the policy is classified as the ‘cine cultural policy’ while the other focus of the policy is on the economic front of propping up a ‘creative economy.’

Filmmaker, Ningthouja Lancha who strongly stressed for the ‘economic cine policy’ said that filmmaking and the media content industry has proven to be as a major revenue grosser the world over and this prospect should be tapped.