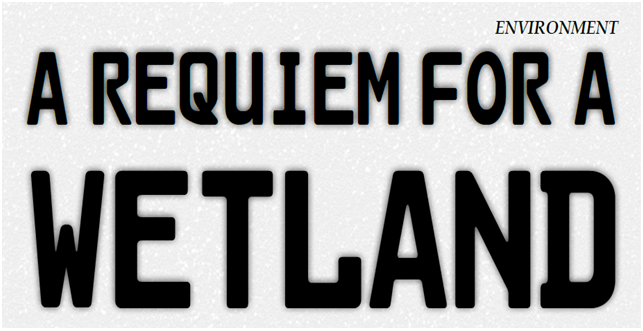 Wetland plays a stellar role for the continued existence of diverse populations of wildlife and plant species.  It helps recharge the ground water. The numerous ecosystem service provided by wetland include: regulating climate, soil formation, nutrient recycling, protecting food, fresh water, water purification and so on.  What is more, human can accrue gain from these water bodies. Apart from the natural wetland, there are man-made wetlands which contribute to sustaining the aquatic faunal and floral diversity. This nature’s wonder has been afflicted with woes. Like other ecological system, this wetland variety is facing threat. The threat is from human. We have little cognizance about its ecological service. 38 years have passed since India became a signatory to the Ramsar Convention in 1982. It has great responsibility to conserve these water bodies. Though wetlands are identified as wetland of International Importance, National Importance of all water bodies are nature’s gift. They merit to be reckoned with.

It is before our very eyes. But the bottom line is we have a smattering of wetland literature. In this regard, the prevailing status of the wetlands speaks. Instead of nurturing them, we treat them as garbage dumping site. Going by the status of some wetlands, it can be said that they are the most preferred landfills for solid waste. There is instance of using wetland as end point for discharging industrial and domestic untreated effluents. According to conservative figure worked out from existing data, number of wetlands lost from 2000 to 2010 is about 276,940 to 292,327 in India. It says the human treatment meted out to them. One of the major reasons for such a decline is the failure to consider them as a productive unit of land. In Assam, the status of the wetlands is no different. The wetland values are not understood. The fate of some of the wetlands is hanging in the balance.

The case in point is Dora Beel, a wetland which is the be all and end all of over 10, 000 families of farmers. There are some 2500 families of fishers who bank on the wetland for their livelihood. The wetland is spread over 116 hector area of land in Assam’s Kamrup district. This is one of the four wetlands in Assam on which important scientific work in the line of hydrology was undertaken. The other three wetlands are Deepor Beel, Chalcala Beel and Chandubi Lake. The study was undertaken under the project sponsored by Northeastern Council. The period of study spanned 3 years from 1977 to 1980.  Though Deepor Beel has earned global tag by becoming Ramsar Site, government apathy has consigned the glory of tectonic wetland Chandubi to oblivion. Now an Important Bird Area of A1 category, the area of Chandubi has been reduced to 4.5 square km from 712 hector.  The entity of Chal Beel is virtually non-existence. The Dora Beel abounds in rich aquatic biodiversity. It was once home to 74 fish species. The aquatic visitation comprises ornamental and medicinal plants. Expert is of the view that the number of ornamental plants and medicinal plants found in the wetland is respectively some 26 species and 7 species.  “The diversity of phytoplankton and zooplankton of this wetland is highly productive,” M. M. Goswami, former professor of Gauhati University said.