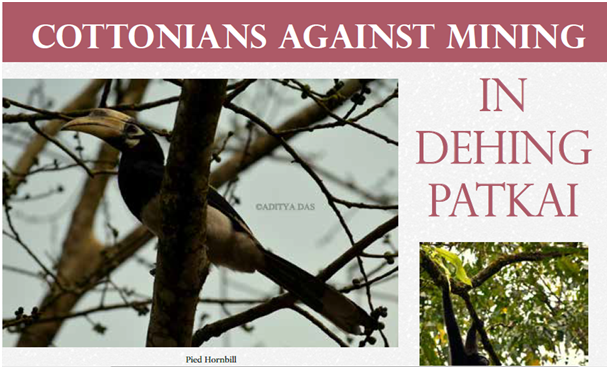 Two students of Cotton University—Titir Debnath and Aditya Das both doing master’s degree in Environmental Biology and Wildlife Sciences at Cotton University are creating mass awareness regarding alleged and reported coal mining project at Saleki Proposed Reserved Forest, a part of the Dehing Patkai Elephant Reserve. Expressing satisfaction over the instruction by Chief Minister, Sarbananda Sonowal to Forest Minister, Parimal Suklya Baidya on May 20, visited Dehing Patkai Reserve Forest and took physical stock of the Reserve Forest and reported him.

Titir Debnath in an exclusive interview with Eastern Panorama informed that the forests of Dehing Patkai Elephant Reserve are one of the country’s last standing lowland evergreen rainforests, often referred to as the ‘Amazon of the East’.

Explaining the importance of these forests, she said it harbours a unique biodiversity, which includes rare species of flora and fauna. Some of the notable species are birds like Hornbills (“The Farmers of the Forest”), Yuhinas, Babblers, Warblers, Trogons, White-winged Duck (the state bird of Assam), and the Greater and Lesser Adjutant Storks while the mammals include the Asian Elephant, Western Hoolock Gibbon, Porcupine and the Chinese Pangolin each one of them contributing to make the fauna of our state amongst the most remarkable in the country.

“Apart from several unusual canopy-dwelling species, there are charismatic reptiles like the Norvill’s Flying Lizard, King Cobra, Tokay Gecko and the Monitor Lizard. The area also hosts more than 150 species of butterflies that includes some very rare species, which are endemic to this region and found nowhere else in the Indian subcontinent. Amongst the diverse flora, the forestland is primarily dominated by the towering Hollong (Dipterocarpus retusus), an endangered species that has been chosen as the state tree of Assam, and Mekai (Shorea assamica), another unique species. These forests also host plant species, such as the Yellow Snake Tree (Altingia excelsa) or Jutuli, Magnolia pterocarpa or Borhomthuri, Mesua ferrea or Nahar, and several jewel orchid species, which ornaments the forest during the flowering seasons,” Titir Debnath further explained.

In support of their campaign to save the “Amazon of the East, Aditya Das said, that amidst the countrywide lockdown, however, they were shocked to learn that the National Board of Wildlife (NBWL), which is under the Ministry of Environment, Forest and Climate Change (MoEFCC), had nodded its approval to allow coal mining in the Saleki Proposed Reserve Forest (PRF), which is an integral part of the Dehing Patkai Elephant Reserve.

While pointing out the orders for mining, Aditya Das said that the NBWL had earlier in July 2019, formed a committee that included the noted wildlife biologist Prof R Sukumar, Assam’s Chief Wildlife Warden and representatives of the local wildlife division to assess the suitability of the area for mining. But without adequate assessments, however, the NBWL in consultation with the Assam Forest Department, on April 7, 2020, “recommended for approval” the proposal for mining 98.59 hectares of land in the Saleki PRF of which 58 hectares has earlier been deforested due to mining by the North Eastern Coal Field (NECF), a unit of Coal India Limited, Das further said.