Open threat to newspapers by Tripura Chief Minister Biplab Kumar Deb in a public function at Sabroom on Sept 11, 2020 has triggered severe reaction in media circles across the country that embarrassed BJP party. The reaction against Deb has spread across USA, Canada, London, Bangladesh and Myanmar besides, flooding criticism in social media. Tripura media have become hostile against the government and indecent behaviour of Chief Minister towards journalists. The apex body of media – Tripura Assembly of Journalists (TAJ) met with Governor Ramesh Bais seeking his intervention to direct the Chief Minister to withdraw his statement and seek apology. The matter has also reached to top leaders of BJP who summoned him to Delhi on the next day along with BJP state President Dr Manik Saha. The BJP leaders here explained to the central leaders that the government is yet to fulfil any of its poll promises, instead of unification of leaders and MLAs, Biplab Deb disconnected from all, bureaucrats are unhappy with the Chief Minister and now he resorted to antagonism with media.

They also pointed out that Biplab Deb utterly failed to build up the party base at ground level and all elections, in past 30 months, BJP won by muscle power and misusing administration. Deb, being a greenhorn in the state politics has been scared of few of his MLAs because of their exposure, education, political articulation and pro-people attitude that made him vindictive over last two and half years, which affected the BJP party in the state. Soon after assuming power, Deb kicked out his political mentor and the key person of 2018 assembly election Sunil Deodhar followed by the main vote pullers in the election Subal Bhowmik from the party and Sudip Roybarman from the cabinet.

In the beginning of Covid-19, ruling party MLAs and leaders who are also the reputed medical professionals in the state Dr Manik Saha (Party President), Dr Ashok Sinha (Vice President), Dr Dilip Das and Dr Atul Debbarma (MLAs) along with others had advised the Chief Minister for meticulous planning to combat the coronavirus. None of the advice was accepted rather CM became unhappy with them and mobilized bureaucrats to handle the situation but it failed. As of now, over 250 people died due to Covid-19 in the state where the total population is only 37 Lakh and infection reached close to 25000. The ruling party MLAs have raised allegations of a large scale corruption in procurement of safety kits for health workers, failure of the government to set up basic minimum health infrastructure to treat Covid patients in the hospital and administrative failure of the Chief Minister holding the charge of health. Everyday people here are dying in the hospital after getting infected with Coronavirus, mostly because of lack of oxygen, ventilation support and inadequate care and services in the hospital. As an independent institution in democracy, media in Tripura at large have been writing on lackadaisical attitude of the state government to prevent the disease and install appropriate healthcare facilities for Covid patients since the beginning.

Media have also highlighted the allegations of severe deficiency of protective 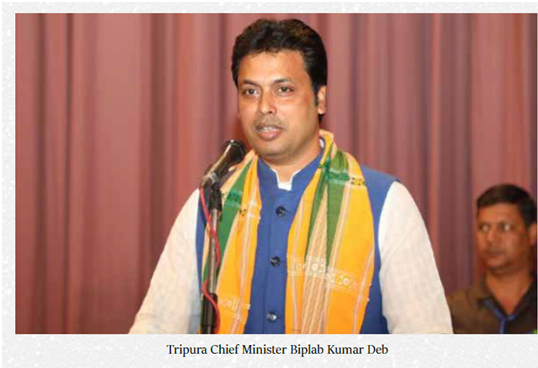 equipment for healthcare workers and the infrastructure including manpower to deal with Covid situation. Tripura government had got three months time to build up the infrastructure, train up the medicos and non-medicos as well as to implement preventive measures to stop the spread of killer disease. Unfortunately, those did not fall in place conveniently.

The media had critically highlighted the public concern against the government decision to hold Covid testing of one among every five flight passengers when inflow of outsiders were at high, which was also not cared for. It has become a popular belief that Callas' attitude of the government and inappropriate decisions since the beginning have turned Tripura into a critical stage of Covid-19 and led to chaos.