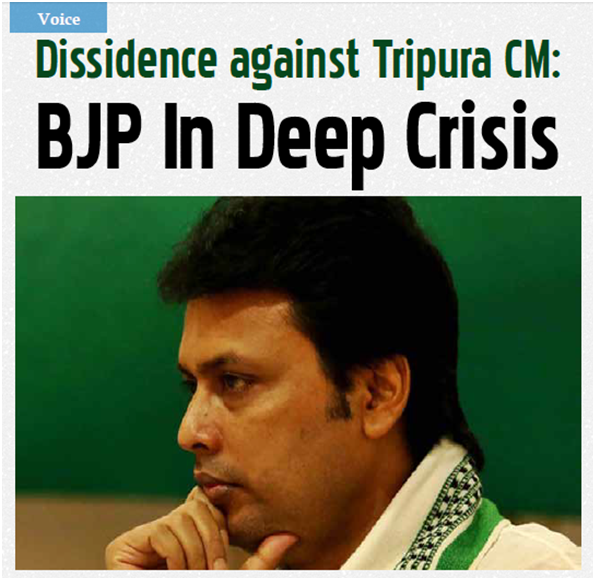 The ruling BJP in Tripura has faced a serious crisis following a large scale dissidence against Chief Minister Biplab Kumar Deb and party State President Dr Manik Saha over deteriorating governance due to mal-administration and organizational failure within two and half years of power. Not only the legislators and BJP workers, the vindictive attitude of Chief Minister has hostile media, opposition parties, business communities and bureaucracy. He was also accused by his party legislators of misleading the BJP central leaderships to shield his failure. The party insiders here accused both Deb and Saha of hatching conspiracy against an influential section of BJP leaders and party MLAs for their own interest and misguided the central leadership. According to a report, over 20 BJP MLAs and a group of senior BJP leaders have united against the Chief Minister and a team of legislators has held a series of meetings with central leaders in New Delhi recently and explained the situation in detail.

A senior party leader informed that BJP was brought to power by Congress and a section of CPI (M) supporters who had been unhappy with their respective leadership as a result, vote share of BJP climbed to 45 percent from 1.5 percent in 2018 assembly elections. Biplab Deb was projected as Chief Minister by the party with a direction that whoever came from other parties be given extra weightage to retain them in BJP, bring more people in the party and build a strong base in Tripura. Allegedly, Biplab Deb soon after becoming Chief Minister took U –turn in connivance with the then BJP National General Secretary Ram Madhav and started misbehaving and ignoring people from other parties; inspite of the fact that 29 of 36 BJP MLAs have been from Congress party. The dissident MLAs have also complained to Delhi that Biplab Deb instead of unification and integration fragmented the party and divided the leaders into several fractions.

“We have appraised the present condition of the party in Tripura under Biplab Kumar Deb and Dr Manik Saha to key leaders at the centre including the Prime Minister. The BJP had made a huge number of promises before the assembly election, which swayed the voters but unfortunately not even a single commitment was fulfilled yet. On the other, the state leaders have also misinformed the party top brasses about their performance,” said a senior leader of the party, a dissident MLA after meeting with the BJP National President J P Nadda and organizational secretary Arun Singh. A campaign had been launched by a vested quarter here to protect the interest of present leadership in the state that the dissident MLAs violated the party constitution by going to Delhi and hatching conspiracy to unseat Biplab Deb and party high command would expel them for raising voice against party President and Chief Minister. But the campaign evoked severe unrest in party rank and file. He however, underlined that Chief Minister had ousted Sudip Roybarman like talented leader from his cabinet just to satisfy his ego last year and later on Biplab Kumar Deb insulted Roybarman and his followers including MLAs on several occasions, which was not agreed by majority leaders of the party; instead they wanted to win over the MLAs and leaders who were opposing Chief Minister for better future of the party.

The Chief Minister holding 27 portfolios in the cabinet and not even allowing freedom to Deputy Chief Minister, a seasoned, educated and popular leader Jishnu Dev Varma to function properly. The Ministers and MLAs have been made puppet and in party whoever opposes his decision has been targeted and maligned in social media. As a result, BJP organisation could not expand in last 31 months rather opposition CPI (M) and Congress re-gained their strength due to unpopular activities of the government and organizational failure. Because of administrative failure of the government, the administration has overpowered the ministers and entire governance became a flop-show of BJP under Biplab Deb and Manik Saha, alleged a three times MLA seeking change of Chief Minister in Delhi. Adding that 25 of the 36 BJP MLAs, now want a change, and a proper reshuffling in the council of ministers to prevent the down fall of BJP government for the next election in 2023.

To read the further articles please get your copy of Eastern Panorama November issue @http://www.magzter.com/IN/Hill-Publications/Eastern-Panorama/News/ or mail to contact @easternpanorama.in