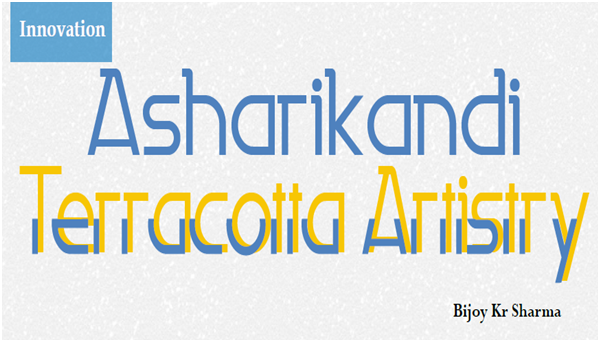 Asharikandi, is now a highly focused village after Prime Minister mention its name in one of his Man Ki Bat in September.

In an hour, artisans of Asharikandi created history by making 150 Gandhiji busts in terracotta style with clay and to remember him on his 150th birth anniversary.

Since after mentioning of Asharikandi doll making by Dhubri's Asharikandi by Prime Minister, Narendra Modi in Man Ki Bat and its prospect  in worldwide doll market,  aired by  All India Radio programme in September, it  rejuvenated the artisans and people of Dhubri as well.

Programme was held under the joint auspices of Dhubri District Industrial and Commerce Centre (DICC) and North East Craft and Rural Development Organisation (Necardo) with an innovative idea to motivate and encourage the artisans to catch the huge and potential global markets of dolls, where India is yet to register its presence.

Speaking in the programme, Gyani said that artisans of Asharikandi would continue with good works as there was a big marketing opportunities lying open not only in the country but also abroad.

"If the artisans really work hard in days to come, then the government too should come forward to uplift the industry by providing all infrastructures required to take ahead the industry", Gyani further said.

Addressing the artisans, General Manager of DICC, Normal Kumar Das echoed Deputy Commissioner and said that in order to catch the market of non terracotta doll, also all forms of products in clay, artisans had to come forward and avail the opportunities.

Talking to Eastern Panorama, Director of Necardo, Binoy Bhattacharjee said that many plans, programmes and proposals are being chalked out including plasma technology in terracotta making, which would bring a sea change in the industry.

"There will be a revolution in terracotta industry, if all the proposals are implemented in letter and spirit in near future, but for that artisans have to be united to get the plans  materialised on the ground", Bhattacharjee added.

Gyani while sharing his views with Eastern Panorama, who all along supported this terracotta industry to grow as Governor of Assam too wanted this industry to take a global shape. He said that terracotta undoubtedly is a unique industry which relates and represents the livelihood support (economy), culture and tradition of Western Assam.

Best of three artisans were also awarded by Dhubri Deputy Commissioner, Anant Lal Gyani. He added, “I will leave no stone unturned to make the terracotta products in the wider canvas of world market, but for this artisans have to be trained and infrastructures should be in place. We are taking steps to promote this industry, but artisans should also come forward to make this happen".

To read the further articles please get your copy of Eastern Panorama November issue @http://www.magzter.com/IN/Hill-Publications/Eastern-Panorama/News/ or mail to contact @easternpanorama.in