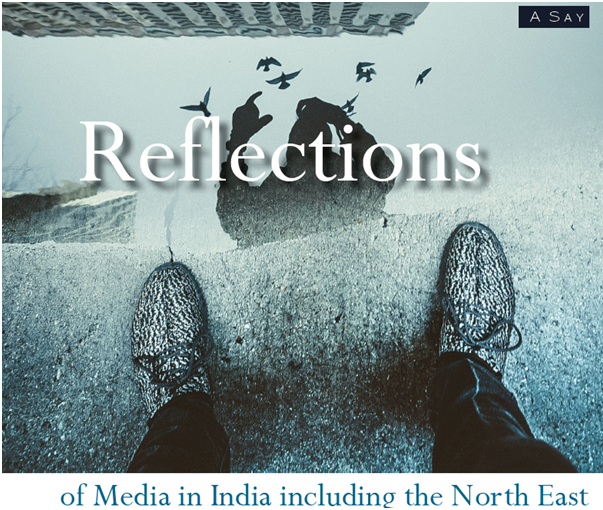 Media undoubtedly is an important pillar that pumps oxygen into the lungs of democracy for its healthy growth and survival. But the question that is being asked is does media fulfills its obligations? Does it convey the news without any pride and prejudice? The importance of media can hardly be over emphasized. With the rapid development in technology, the media today is able to handle tonnes and tonnes of news and events all over the world in the shortest possible time. There are smaller siblings of media like internet, Facebook, Twitter, Satellite channels etc... all engaged in disseminating news to the people across the world. The North East India comprises 7 states often called seven sisters with one brother Sikkim added to this family. There is no other region in our country which so sumptuously mirrors our country's heterogeneous heritage as the North East as a whole. It is a kind of mini India.  North East India as a whole looks like an ocean of beliefs and dialects and the growth of media including the print media is quite encouraging.

The mediascape of the North East reflects an amazing variety. Besides the English, Hindi, Assamese and Bengali newspapers, there are newspapers and bulletins in different dialects and languages. There is an increasing demand for newspapers in the local dialects and languages particularly in the Mizo, Khasi, Nagamese, Manipuri, Nepali, Bodo languages etc. Assam with respect to areas is the second largest state in the North East, naturally the newspapers and magazines etc reveal a fascinating mosaic of beliefs, customs and aspirations of people of different faiths and culture.

At the national level like other pillars of democracy, the media too sometimes shows early symptoms of the sclerosis of neutrality.  The cheapest means of communication, no doubt is the print media through which a larger segment of our population gets daily news and views.

With the passage of time more and more people want news papers in their dialects. The circulation of these papers is increasing day by day. One of the major problems faced by the newspaper today is its high cost of production. Attached to it is a lack of proper marketing infrastructure. When the giant newspapers sometimes have to face financial constraints, medium scale newspapers and magazines feel more the pinch of financial stress. In the changing economic and social scenario one of the alternatives can be to encourage mimeographed news papers particularly in those places where population is less and where delivery is within a small radius. Later Mimeographed weekly and monthly can also be thought of.  It will not only be cost effective, but will also be a well managed venture.

A cursory glance at the varieties of media in the North East presents a cheering picture showing great potentials for expansion. There is a growing awareness among the rural population for easy accessibility to news and happenings not only of our country but also of the world. This kind of demand is undoubtedly a healthy sign of a maturing democracy.

A quick scanning of the state wise breakup of newspapers also exhibits a beautiful spectrum of newspapers, monthlies and weeklies in many dialects and languages of the North East.

In Assam there are several reputed newspapers in English, Bengali and Assamese language. Two Hindi dailies and one in Nepali language are also equally popular.

Meghalaya too offers an impressive scenario: It has a good many newspapers in English as well as in Khasi all of appreciable standard. However, there is no daily newspaper in the Garo language though there is one weekly published from Tura.

In Nagaland too there are several newspapers of good calibre in English. There is also a newspaper in the Ao dialect plus one in the Nagamese language which is the lingua franca among the different Naga tribes.

Mizoram with a comparatively less population has the highest number of registration of newspapers, monthlies and weeklies, partly due to its high rate of literacy which is above 90%. It has also many newspapers of excellence both in English and Mizo.

Manipur too offers newspapers of excellence in English and in Meitei language which are quite popular and are up to good standard.

Sikkim, with its difficult terrain and green valley has a very small population yet it brings out two daily newspapers - one in English and another in Nepali much appreciated by the readers. There is also a newspaper which comes out both in English and Nepali.