Prime Minister Narendra Modi inaugurated the third Ground Breaking Ceremony at Lucknow in Uttar Pradesh. On the occasion, he said that Double Engine Government has brought exponential growth in investment in Uttar Pradesh. MoU of 1406 industrial projects worth Rs. 80,224 crore has been signed. It will create direct employment opportunities to 5 lakh youth. Uttar Pradesh Chief Minister Yogi Adityanath hopes that it will  strengthen the economy by investment in the field of power, textile, IT, infrastructure sector etc. He added that it will increase in income of farmers by establishment of Agro based food processing units. 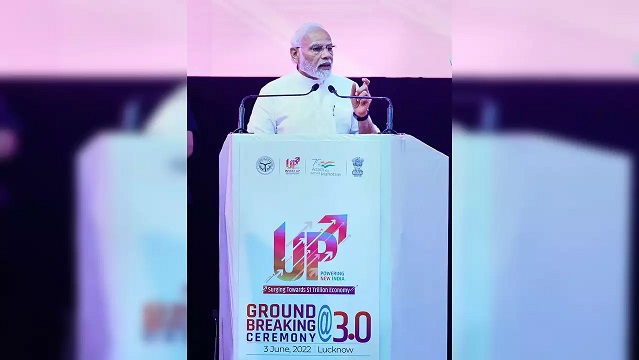 hospitality sector to boost tourism. He affirmed that establishment of cement units will strengthen the construction sector.

In Investors Summit Prime Minister Narendra Modi laid the foundation stone of 1,406 projects worth over Rs 8,000 crore. The projects were in diverse fields, including agriculture, IT and Electronics, MSME, manufacturing, renewable energy, pharma, tourism, defence and aerospace, handloom and textile. Renowned industrialists like Gautam Adani, Kumar Mangalam Birla and other  industrialists attended the mega summit organised by the Uttar Pradesh Government. Defence Minister Rajnath Singh and Chief Minister Yogi Adityanath are among those attending the event.

The first Uttar Pradesh Investors Summit was held on July 29, 2018, and the second one took place on July 28 the next year. During the first summit, the foundation stone of 81 projects worth over Rs 61,500 crore was laid. During the second one, the foundation stone of 290 projects with investments of over Rs 67,000 crore was laid.

The third groundbreaking ceremony organised by the Uttar Pradesh government saw 865 units of the medium, small and micro enterprises (MSME) department roll projects worth Rs 3,586 crore, as per the official spokesperson.

This investment is part of the 1,500 projects worth Rs 75,000 crore  launched during the ceremony chaired by the  Prime Minister  Narendra Modi.