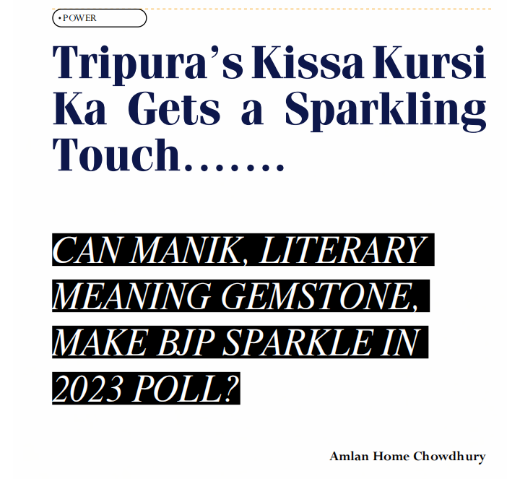 A Manik has been added to the political crown in Tripura.

Such a move, however, is not new as the BJP also charged the Chief Minister in other states just before elections. The BJP removes the guard when it feels the person concerned may not prove to be charismatic enough to lead the party to victory in the polls or generate unnecessary controversies.

This game of political musical chairs is typical of the BJP.

Let us have a look at it.

The BJP over the last six years changed six Chief Ministers before assembly elections in four states. The success of this musical chairs can be understood by the fact that the BJP did not change the Chief Ministers in Rajasthan, Chhattisgarh, Jharkhand, Madhya Pradesh, Maharashtra and Haryana. Except Madhya Pradesh, the party lost in all other states.

Now you know the reason, why Tripura now has a gem – Ratan – in the hot seat.

The success of BJP in ousting the CPI-M in Tripura charted out a new political course in the state but Biplab (Kumar Deb) could not yield the desired result. Due to his alleged dictatorial tendencies, the BJP’s Tripura unit succumbed to factional infighting.

But the legislative assembly poll is nearing. The Trinamool Congress, Congress and CPI-M are trying to cash upon this factional infighting within the BJP. Naturally, it became a political compulsion for the BJP to change the guard in Tripura.