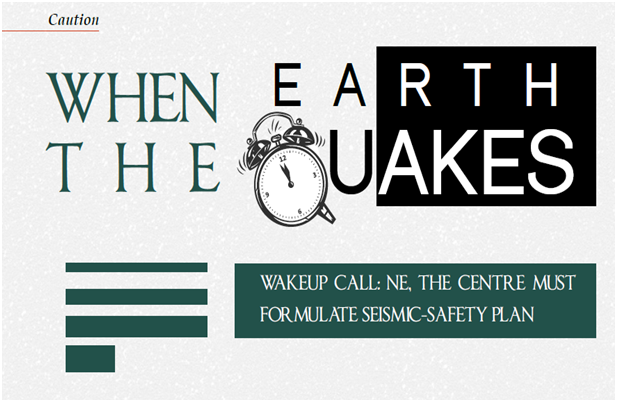 When the earth quakes, the primal fear that shakes you arises out of your feeling that the Doomsday has come. This psychosis of fear lasts for days, sometimes years, even after the earth settles down to its calm. No wonder, the Mizoram Government just sought the help of psychologists to dispel the fear-spells of hundreds of people living in some villages including Khawbung, Saitual, Siaha, Serchhi and Zokhawthar that rocked recently.

In fact, the people suffered from terrible trauma of psychic nature due to massive seismic disturbances in the tragic Assam quake of 1950 that took a toll of over 2500 people. Known as the Assam-Tibetan Plateau earthquake, the total toll was over 4300 including the Tibetan part.

At that time, 70 years earlier, the Northeast was not so advanced to seek the help of psychologist as of now. Though the Northeast shook for about 50 times in the first seven months of 2020, the region was lucky not to lose any life.

In Mizoram, eight earthquakes rocked the state since June 18, 2020 with Champhai district bordering Myanmar being the worst hit. Over 158 houses, church buildings, historical structures, schools, colleges and community halls were damaged in the district.

However, the stress, strain and mental trauma caused by the quakes occurring in July, 2020 in Mizoram happened to be mammoth. It is here where the state government acted very aptly by seeking the help of psychological experts to mitigate the aftershocks of the people of the state.

Though the tremors in Northeast takes place every year being a highly susceptible seismic zone, in 2020 the cases rose up to new height of 50 cases with Mizoram being its worst victim.

A large number of houses were damaged in Mizoram due to the quakes. The tremors were also felt in Manipur and Myanmar. In fact, the frequent earthquakes rocked entire Northeast, Sikkim, Bangladesh, Myanmar, Bhutan, Nepal and Tibetan plateau due to change of tectonic plates.

Slow-motion-march of tectonic plates builds stress in the earth’s crust and upper mantle shaking them. The stress hits a breaking point and releases in a ground-shaking quake that sends blocks of earth shifting out of place causing the quakes.

Dimension of property loss in the 2020-quakes were quite substantial in the Northeast with Mizoram being the worst hit. This resulted in the Chief Minister Zoramthanga seeking help from the centre for rebuilding the houses, churches, bridges and roads in the state particularly in Champhai district.

Acting immediately on this, the Prime Minister Narendra Modi said the damages would be repaired and scientific examination of frequent occurrences of quakes too would be examined in Mizoram.

Likewise, the Geological Survey of India (GSI) is going to send its team of seismological experts, geo-physicists to Mizoram. The geologists from the GSI-Mizoram unit are already on to the job of formulating strategy to install more seismic monitoring centres in the state.

Though the dimension of damage was less, Manipur too suffered due to quakes.

The Prime Minister said Minister-in-Charge (of Northeast) has been asked to visit the areas in Mizoram to assess the damages and report to him (so that immediate steps to redress the damage can be made).

The Union Home Minister Amit Shah also contacted the Chief Minister Zoramthanga and took stock of the situation. He assured of all help to Mizoram to smart out of this natural calamity.