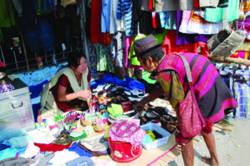 Parasuramkund is a place of great sanctity located in the lower reaches of north Tezu in Lohit district which attracts pilgrims from all over India for a dip in the kund during  Makar Sankranti which normally falls in mid January every year. 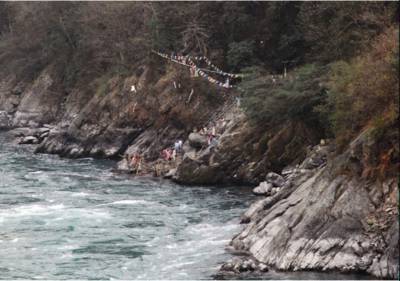 One day, Renuka, mother of Parasuram, went to fetch water. While returning, she felt drawn towards King Chitranathan playing with celestial nymphs. Consequently, she was late in returning to the ashram. Jamadagni her husband, was worried over her delay, as it was getting late for the midday worship. On perceiving through his divine power the reason for her delay, Jamadagni was so enraged that, on her arrival, he asked his sons to kill her. None of the six sons except Parasuram could oblige. He immediately beheaded his mother. The handle of the axe which he used however, was bound to his hand. Pleased with his son, Jamadagni commanded Parasuram to ask for a boon. Parasuram asked for six boons and one was the immediate recovery of his mother. However, this did not wipe out his sins. He was told that the only way to wash off his sins was by taking a dip in the brahmakund. Only then would the axe which was stuck to his hand drop.

Prarsuram ultimately came to Bramakund and made a passage for the kund to come out by digging in the banks of Brahmakund. The spot where the axe dropped from his hand came to be known as Parasuramkund. The Kalika Purana states that a mere bath in the kund leads to emancipation. Close to Prasuram Kund is located the sacred well or Brahmakund, at a point where legend holds that Parasuram had opened a passage through the hills for the Brahmaputra with a blow of his axe.

The Parasuram Kund, Tamreswari temple, Sivalinga site and the seat of King Bhishmak in this region have found mention in Puranic and Tantri literature.

A month long religious fair or mela is organised each year at Parasuram Kund, the holy shrine of North East India.