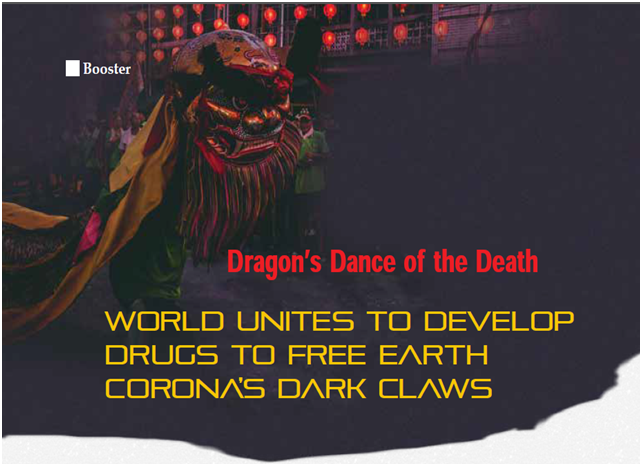 Getting stunned suddenly by Corona’s satanic invasion, the globe now seems to be revolving round an unheard of pivot: agonizing wait for anti-pandemic drug and vaccine.

All are hoping for a remedy to stop the specter of death that loomed so large that it shadowed the entire world. Its specter kept on darkening on every passing day. And it continued!

Grimness of the situation can be gauged from the fact that even as normalcy in worldly affairs slowed down, the coffin makers and crematorium workers turned hyper busy to handle bodies of the dead.

Strangely enough, it is this dance of death that now has united the world. Setting aside their rivalry and differences, they joined in hands to defeat the dragon that originated in China.

Death, really, is a strange equator! It is not distinguishing rich and poor, borders of nations, languages and religions. The COVID-19 is simply killing. But to kill it, the entire world now is working overtime to find a remedial drugs and vaccines.

Large Scale Clinical Trial of Drugs to Intensify from July, 2020

The Research and Development Blueprint of WHO has been activated to accelerate diagnostics, vaccines and therapeutics for this novel coronavirus.

Even as trials on human body are being carried out globally on a regular basis, the late-stage large scale studies of drugs developed by several biotechnology and pharmaceutical companies including Moderna Inc, Sinovac Biotech, CureVac, GlaxoSmithKline and Oxford-AstraZeneca are set to enter late-stage trials in July, 2020.

According to the WHO, at least 13 experimental jabs were recently tested on human body and over 120 drug-varieties are in earlier stages of development. By the year end, anti-Corona experimental vaccines are likely to be floated across the world’s markets.

Talking to media persons from Geneva, the WHO Chief Scientist Dr Soumya Swaminathan said by the end of 2021, the Covid-19 vaccine would be available to the people around the world.

Meanwhile, the German company CureVac declared the first results of its vaccine could be available in September or October, 2020.

While the Oxford-AstraZeneca and Moderna said, they have made scientific progresses in developing the vaccine, the world’s largest vaccine manufacturer GlaxoSmithKline has also entered the clinical trial stage with one project.

The GlaxoSmithKline plans to produce one billion doses of vaccines next year. In Australia, the Perth-based Linear Clinical Research is also conducting tests in Perth, Australia. The Chinese Academy of Medical Sciences is already conducting test of vaccine developed by it.

The Israel Institute for Biological Research claimed it had completed successful Corona Virus vaccine trials on rodents and within a year, the vaccine would be ready. The Israeli research report says trials resulted in rapid and potent induction of neutralizing antibodies against SARS-CoV-2”.

Back home, Hetero Labs Ltd functioning out of Hyderabad has announced its generic version of Remdesivir, experimental drug of Gilead Sciences. The company proposes to supply this drug to hospitals across India. The Cipla Ltd also is developing its own version of Remdesivir.

The Regulator Drug Controller General of India approved the generic versions made by Cipla and Hetero for restricted emergency used in severe COVID-19 cases.

Fevipiravir, another drug is also going to be launched to treat this disease. The drug is supposed to reduce “viral load”.