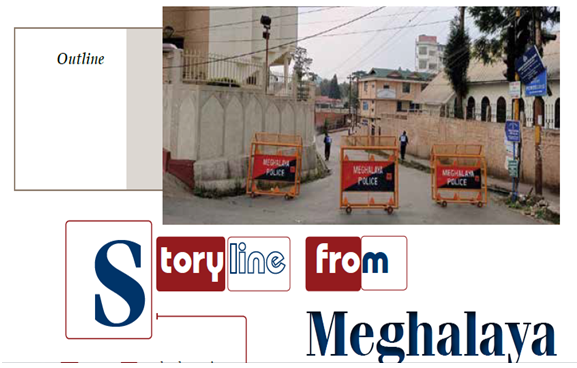 Meghalaya fights against COVID-19 seem to be very successful at the beginning, with strong effort from the Health Department and the state Government before the announcement of national lock down by Prime Minister, Narendra Modi on 24 March 2020. The state Government has taken initials steps by sealing off all borders including inter-state and international border. The state recorded its first positive case for COVID-19 on 13 April 2020 after a senior doctor Dr. John L Sailo Ryntathiang from Bethany Hospital was tested positive.

In the aftermath of confirmed case, the state government has set up four quarantine centres in the state with a capacity to provide care to 400 patients in Shillong which include Indian Institute of Management (IIM) Shillong, Nongthymmai and at Meghalaya Administrative Training Institute (MATI) in Mawdiangdiang and Tura in West Garo Hills District with a team of doctors and para medical staffs monitoring at these centres 24×7. The State government has also suggested turning hotels into quarantine centres in Shillong area and its surrounding.

The sample of the doctor who owns a private hospital was tested at North Eastern Indira Gandhi Regional Institute of Health and Medical Science (NEIGRIHMS). The doctor despite having no travel history was tested positive and this has led to wide speculation that, the doctor might have been infected with the virus from his son in law who is a pilot and had history of travelling abroad and other parts of the states in India. The 69-year-old Shillong-based doctor succumbed to the COVID-19 on 15 April. Unfortunately, the residents of Jhalupra, Mawbah and its adjacent localities had strongly opposed his cremation as they feared that the fumes or something would carry the virus which led them to come on streets to protests defying the lockdown orders. Interestingly, the Riatsamthiah Presbyterian Church willingly agreed to criminate the body of the doctor at its Cemetery at Lawmali in East Khasi Hills on 16 April 2020.

Following this inhumane act, of not allowing the dignified doctor burial, there was outrage by mass condemning the act. In no time The Meghalaya High Court directed authorities to take legal action against anyone obstructing the cremation or burial of COVID-19 victims in the state. The order stated that any person, local body, dorbar, shnong or organisation which obstructs state authorities in the control of the pandemic or any matter connected to it such as "dead body management, cremation and burial shall be dealt with in accordance with law and cases be registered under appropriate provisions of law. The court also directed that state authorities to sensitise people, especially where the cremation or burial grounds are situated.

Meghalaya Chief Minister Conrad K. Sangma took to twitter to confirm the case and urged citizens not to panic. Following the news of confirm case, on the night of 14 April, the State government had sealed off Bethany Hospital and also imposed 48-hour curfew in Shillong and Nongpoh and its adjacent areas.