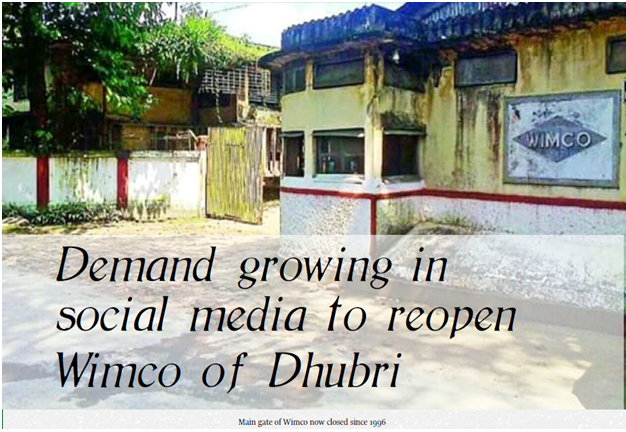 Western Assam sans any industry worth naming in last century but then under the British era, a match factory was set up at Dhubri by a Swedish Company named  as Assam Match Company ( Amco) in 1925.  It was a lone industry in Western Assam till Bongaigaon Refinery and Petrochemical Limited (BRPL) which now known as OIL Bongaigaon Refinery (BGR), came into being in 70s.

Again due to change of ownership of Amco , it came to be known as Western India Match Company ( Wimco), when Jatia group of Company  took over all the five match factories in India – Dhubri ( Assam), Calcutta, Madras (Chennai), Bombay (Mumbai and Baraily ( Uttar Pradesh) in 1979

Mazumdar is getting tremendous feedback and support on his campaign for revival of the century old and historical industrial unit of the district. In his post in social media, Mazumdar stated that prevailing poor socio-economic condition of people living in this district are compelling for revival of this match factory.

"Western India Match Company (Wimco) was a medium-scale industry established by a Swidis company in 1925 with total strength of 2287 workers, staff and officials", Mazumdar further stated.

It had ran over 71 years smoothly, but due to ban on felling tree by Hon'ble Supreme Court and militancy, the company reportedly had to close down this industrial unit in 1996, he said. He pointed out a conspiracy  that was hatched between management and labour union leaders, and the process of closing started after 1992 and under this secret plan, it was closed within a span of four years.

Tree felling banned by the Hon'ble Supreme Court was only confined to reserve forest area and woods required for the match factory were of soft wood variety like Simul, kadam  and other soft wood grown in the unclassified forest areas and felling of them was not banned, Mazumdar further pointed out.

Mazumdar alleged that on the plea and pretext of ban, the company very tactically moved forward to wind up the industry. Sources said later the entire land measuring around 175 bighas of land along with infrastructure, was sold to ITC business group in 2001.

However, people of Dhubri hoped that this business giant ITC would set up some industry on the said land, but 20 long years elapsed since it took over the possession of Wimco, and unfortunately till now, the group has not started any new industrial activity here.

"Having studied the pros and cons of Wimco's closure and given the socio-economic condition of people of Dhubri district where no industry worth naming exists, we have started this movement for its revival with hope that you all support and bring back smile on the face of people", Mazumdar appealed in the social media.

Another initiative is being taken by the Dhubri District unit of BJP at the appropriate level of the state government to reopen the industrial unit and in talk with ITC management to get it functional.

Talking to Associate Editor of Eastern Panorama, Bijoy Kumar Sharma, President of Dhubri District unit BJP, Dr. Debamoy Sanyal informed that the party after submitting memorandum to the Assam Industry Minister, Chandra Mohan Patowary was continuously monitoring the development as regard to opening of this industrial unit.

“We are in talk with ITC management at Kolkata since last year. In fact, at the instance of Industry Minister, Chandra Mohan Patowary, I personally met ITC Chief Executive Officer, Chittaranjan Dhar at Kolkata and had a detail discussion on opening this industrial site. ITC is contemplating to set up a cluster of industrial unit under one shade. But change in situation after the break out of Covid19 and prolong lockdown, neither any planning nor any visible step are taken so far towards its opening”, Dr. Sanyal added.

Replying to a question on alleged selling of the lands secretly by ITC, Dr. Sanyal ruled out such possibility and said that a team from the party would soon meet Chief Minister, Sarbananda Sonowal and urge him to take initiative for setting up a cluster of industrial units by ITC in its lands.