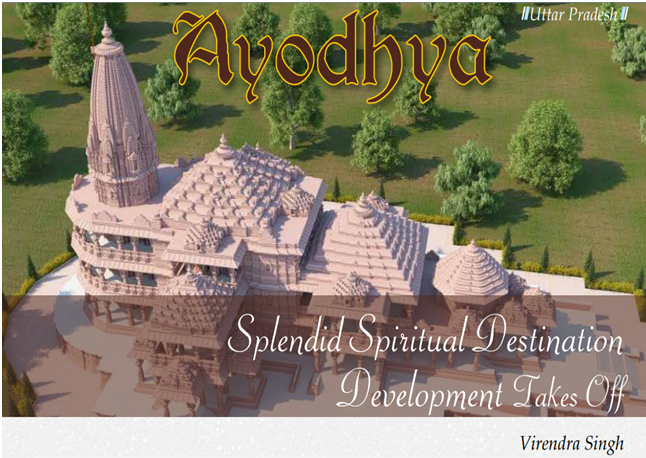 With ground breaking (foundation laying) of Ram temple construction, the Uttar Pradesh Adityanath Yogi government has made elaborate plans to construct a resplendent destination in the temple town of Ayodhya. There is a proposal to install a 151-metre-tall statue of Lord Ram on the banks of the Saryu River in Ayodhya.

The ancient holy city will be developed as a ''major pilgrimage centre'' under the Smart City Project.

An Ayodhya Pilgrimage Development Council will be set up which will be entrusted with the task of developing the city with the state-of-the-art modern infrastructure to promote tourism and connectivity. As per the directions of the top district and Uttar Pradesh government officials in coordination with the Central government had met and prepared a detailed roadmap for transformation of Ayodhya into a smart city. The state government aims to build Ayodhya as the biggest religious destination in North India with plans to constitute an ‘Ayodhya Tirtha Development Board’ to take this task further. For the transformation of Ayodhya, the government will soon make air connectivity better in Ayodhya with an international airport with all modern state-of- art facilities. The Narendra Modi government at the Centre has already sanctioned 100 crore rupees for revamping the Ayodhya railway station. Moreover, a bus terminus with a capacity of 3,000 to 4,000 buses has also been proposed.

It may be recalled that Ayodhya was a town in Faizabad district before the Yogi Adityanath government renamed the entire district in 2018.

A 13-kilometre long corridor on the life of Lord Ram is also on the cards. A cruise on the Saryu River is also proposed, which will provide a scenic view to tourists and devotees who come to Ayodhya. Meanwhile, five-star hotels and resorts are also expected to come up in the temple town. A proposal to include 42 nearby villages into Ayodhya has also been sent to the government by the Ayodhya Municipal Corporation. Earlier the proposal was to include only 22 villages. The state government is likely to rope in a force of more than 2,000 labourers for the completion of construction of the Ram temple.

The highly-anticipated, ‘magnificent’ Ram temple that millions of Hindus are eagerly waiting for is soon set to become a reality after Prime Minister Narendra Modi laid down the foundation stone on August 5 2020.

Renowned Architect Chandrakant Sompura and his sons have been entrusted with responsibility to design the Ram Mandir. The completion of the temple is expected to take around three-and-a-half years.

Nearly 1,00,000 pilgrims a day at the Shree Ram Janmabhoomi temple is expected, once it is ready by the end of 2023 or 2024. The Uttar Pradesh government and the Centre are working on a plan to develop Ayodhya a big centre of tourist, economic and religious activity. Prime Minister Narendra Modi said at the ground-breaking ceremony on August 5, 2020,  that the temple will not only increase the grandeur of Ayodhya but also “change the economy” of the region. “There will be new opportunities in this region. People will come here from the whole world for paying obeisance to Lord Ram and Mata Sita, so much will change here,” he said.

The mega plan is taking shape simultaneously with the construction of the temple and will include an international Sri Ram Airport in Ayodhya, a modern railway station taking shape by next year, new religious tourism attractions like the world’s tallest statue of Lord Ram and development of the entire 84-mile perimeter area around the city as a religious destination. Several multi-level parkings, a network of widened highways and a two-km long elevated road leading to Ram janmabhoomi, underground cabling and deployment of electric vehicles to ferry people are on the anvil.

There is also a proposal to expand the area under the Ayodhya Development Authority to allow the coming up of hotels, restaurants and tourist-related infrastructure, along with development of banks on both sides of the Saryu River. Union ministries of tourism and road transport and highways are working with the state. The PM also said that the temple should be a modern symbol of India’s heritage. Ashish Sompura, son of the temple’s original designer Chandrakant B. Sompura said, “The first priority is the completion of the temple and the corridor till the temple. The plan for that is ready. We are the architects and Larsen & Toubro will construct the temple”.

The 70-acre land available for the temple premises will also see extensive development, with a 360-degree theatre to screen documentaries on the life of Lord Ram, museums, photo galleries, worship halls, a big food court, a laser sound-and-light show in a pond, solar lighting and an extensive green belt area. The temple premises will be a mix of heritage and modernity.

Given the proposal for a new Ayodhya township, there is a plan to develop 60 religious spots along the 84-mile perimeter route around the holy city which is more than 250-km long and touches five adjoining districts. About 10 famous ponds in Ayodhya will be rejuvenated and multiple railways over bridges are planned on both the 84 Kosi Marg and the 14 Kosi Marg around Ayodhya to offer a hassle-free experience to pilgrims. Ayodhya will attract many tourists from Middle East, Afghanistan and Pakistan.