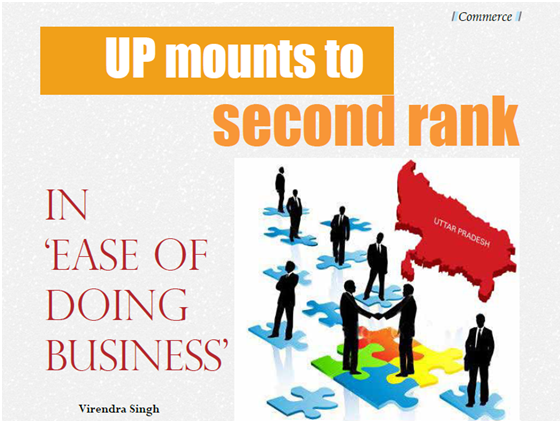 Uttar Pradesh climbed upto 10 places to rank second in EoDB, 'ease of doing business'. Other than implementing business reforms, Uttar Pradesh Chief Minister Yogi Aditya Nath has made strenuous efforts to make congenial atmosphere for attracting investment. In recognition of the ongoing efforts of the Yogi Adityanath government to make Uttar Pradesh a better investment destination, the state has made a big jump to gain second position in the ease of doing business ranking 2019, released by the Union Finance Minister Nirmala Sitharaman. Uttar Pradesh climbed 10 places over its 2018 position, leaving behind several leading states like Maharashtra, Gujarat, Telangana and Rajasthan in the process, as per the ranking which is based on implementation of the Business Reform Action Plan for Atmanirbhar Bharat.

Notably, UP is only second to Andhra Pradesh, which retained its top position for the third year in a row. Congratulating the people of the state, Chief Minister Yogi Aditynath said, “UP is committed to the call of Prime Minister Narendra Modi for AatmaNirbhar Bharat and making all efforts in this regard. UP achieving the second rank in the EoDB rankings is a proof of that". The phenomenal jump in UP's national ranking comes on the backdrop of sweeping reforms carried out by the state government over the last few years.

The state implemented 186 out of the 187 reforms suggested by the Department for Promotion of Industry and Internal Trade.

‘Nivesh Mitra’, a single window clearance portal launched by the state government has helped in disposing 94 per cent of the nearly 2.3 lakh, No Objection Certificate (NOC) applications received in the last two years. At present, 146 services under 20 departments are being provided through this portal.

Out of 18,120 grievances received from entrepreneurs on the Nivesh Mitra portal, 98 per cent of them had been successfully resolved, CEO of Invest UP Neena Sharma told. The state has also started to rank its 75 districts in ‘District wise ease of doing business’ ranking started from May 2020.

Factoring in user feedback to check progress on reforms also played a key role in achieving this milestone for UP. User feedback’ module of the portal had received 62,286 investor-feedbacks till July out of which around 73% users had rated services as “satisfactory”.

The state government has been successful to improve ease of doing business ranking by introducing various IT driven modules. The state has been emphasising to impart transparency and best practices to business-to-government (B2G) interactive procedures through use of technology.

UP has left behind several leading states such as Gujarat, Telangana, Rajasthan, Maharashtra etc in the EoDB annual rankings,” said a spokesman of the state government.

UP is second only to Andhra Pradesh (AP). This year’s exercise was completely based on user feedback. Attaining the second rank indicates that entrepreneurs have been receiving the benefits of these reforms implemented by the UP government under the dynamic leadership of Chief Minister Yogi Adityanath, the spokesman said.

“From May onwards, the state had also started to rank all its 75 districts in the EoDB exercise,” he added. Under state BRAP 20-21, UP implemented 170 out of 301 suggested reforms, he added.

Over 20 departments such as Invest UP (Udyog Bandhu), labour, commercial tax, power, stamp and registration, excise, food safety and drug administration, UP Pollution Control Board etc have been an integral part of the reforms, according to the spokesman.