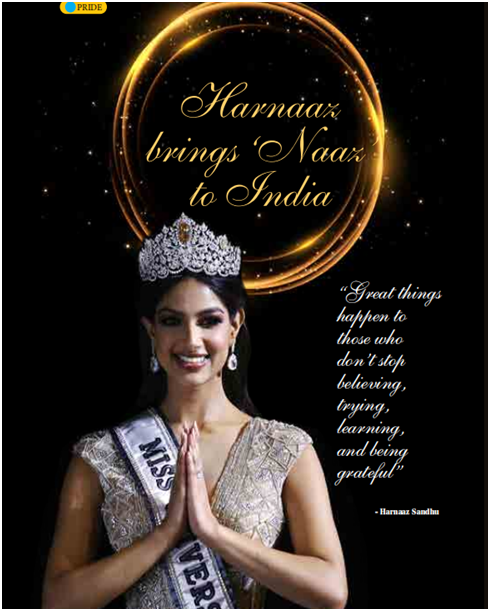 “Great things happen to those who don’t stop believing, trying, learning, and being grateful"- Harnaaz Sandhu

After 21 long years, the Chandigarh-based model, Harnaaz Kaur Sandhu has made the India proud by winning the Miss Universe crown 2021. She conquered the crown defeating contestants from 80 countries around the world. The 70th edition of the pageant was held in Eilat, Israel. Harnaaz Sandhu,  was crowned by her predecessor Andrea Meza of Mexico, who won the pageant in 2020. While Paraguay's Nadia Ferreira, 22, finished second, South Africa's Lalela Mswane, 24, came third. The crown was presented to her by previously reigning Miss Universe Andrea Meza from Mexico.

Who is Harnaaz Sandhu?

The reigning Miss Universe is from Chandigarh, India born on 3 March 2000 in a Sikh family. Her father is a realtor and her mother is a gynaecologist. She attended the Shivalik Public School, and the Post Graduate Government College for Girls, from her native state Chandigarh. She is currently pursuing her Master's degree in Public Administration.

Harnaaz draws inspiration from her mother, who broke generations of patriarchy to become a successful gynecologist and led her family. Driven to support other women the same way, Harnaaz grew up working with her mother at health camps addressing women's health and menstrual hygiene. Deeply conscious of the privilege her mother's struggles gifted her, Harnaaz today is a strong advocate for women's empowerment, particularly their constitutional rights to education, careers, and their freedom of choice. Professionally, Harnaaz is an actor with two Punjabi movies slated for release in 2022 and hopes to essay characters that break stereotypes that the world has of women. Like any other girl, Harnaaz enjoys the company of friends, loves yoga, dancing, cooking, horse riding, and playing chess. She is a water baby and never misses a chance to jump into a pool to rejuvenate herself.

Life was never easy for the Miss Universe Winner. She had been a victim of bullying and body shaming in her early years. Although Sandhu has moved past those challenges, she is glad to have received the opportunity to stand up for the voiceless, and inspire them through her story. She was subjected to child bullying. In fact, there were several challenges, both mentally and emotionally that she had to overcome, to be where she is today.