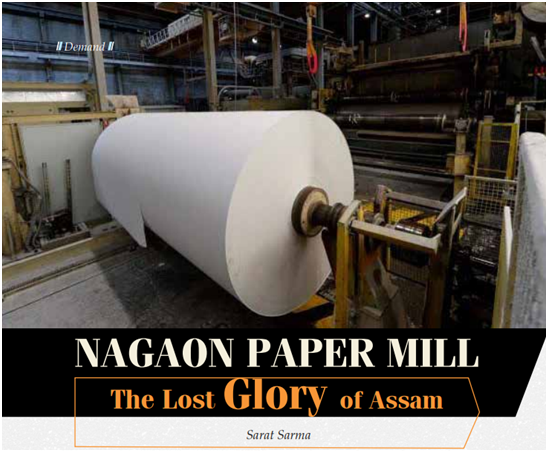 The biggest paper mill under Hindustan Paper Corporation Ltd in Assam’s Morigaon district has not seen any sign of rejuvenation even 6 years after Prime Minister Narendra Modi’s revival promise.

New Delhi assured a lot to the mill employees from time to time but all these later became a nightmare to them as government is found inching towards its hidden strategy of handing the mill over to some private parties. The mill’s shutter remains closed for the couple of years. Three mill employees committed suicide so far as they are deprived from the money they deserve from the government.

Nagaon paper mill under the Hindustan Paper Corporation was established in 1985. The mill has the capacity of producing 300 mt paper per day. Altogether 750 people from different parts of the country were engaged at the very beginning as employees of the paper mill. As per report, Nagaon paper was the only production unit of the corporation which earned profit till the end of production.

‘Could you believe on the last day of closing shutter, the paper mill produced 269 mt paper. We title this as a big injustice and unholy nexus among politicians and some private paper mill owners seem to be the reason, why government stopped the paper mill’ said Rajib Hazarika, a paper mill union leader.

Hindustan Paper Corporation has two production units in Assam which includes the Cachar paper mill in Barak valley which was closed a decade back.

A high level source of Hindustan Paper Corporation today alleges that in 2014, Prime Minister Narendra Modi and then BJP President Rajnath Singh assured that once BJP comes back to power both of the two paper mills would be reopened.

‘That was the biggest joy for all the people of the state when we met Modi who assured us that both the mills are going to be rejuvenated with central assistance to the corporation. That was just a bad dream we dreamt at that time’ the corporation source said.

Closing of the shutters of the two units had a severe impact on the two neighbouring hill districts from where raw materials were collected. ‘Karbi Anglong and Dima Hasao were the two main raw material sources of the paper mills. The unused bamboo resource was fully utilized when the two paper mills were functioning smoothly. The large green areas were taken on lease by the paper mills management and raw materials were lifted with the help of contractors. Bamboo resources of the two districts remain unused again once the mills closed’ said a Karbi Anglong autonomous council source.

‘Nagaon paper mill in Jagiroad is known to be the best paper producing unit in India. We want both Delhi and Dispur to consider the quality production and give Assam back the lost glory’ said Ajit Saikia, the HPCL employee.