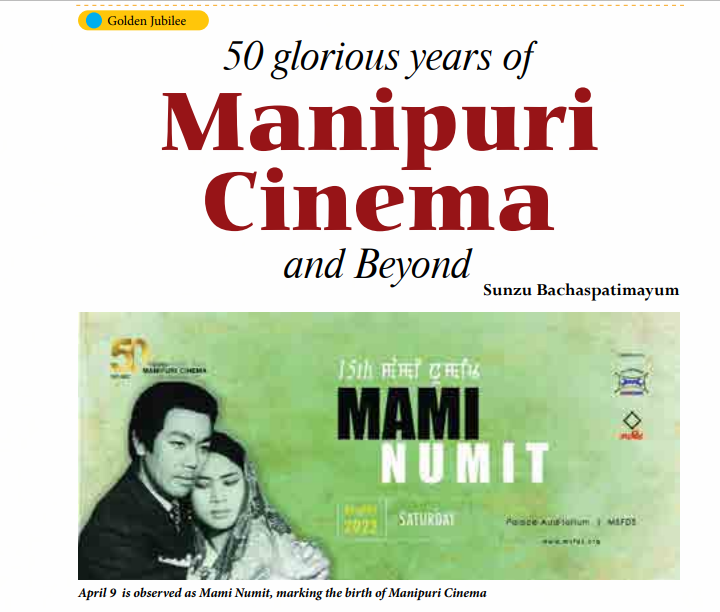 It was Matamgee Manipur (Contemporary Manipur) which enthralled the people of Manipur when the lingua franca was heard for the first time on the silver screen. Rightfully, the 50th anniversary of Manipuri Cinema was commemorated as a year long Golden Jubilee event, starting from 9 April 2021 which concluded recently on 29 April 2022.

Despite the Covid pandemic proving to be a damper, the Golden Jubilee Celebration of Manipur Cinema, held under the aegis of the Manipur State Film Development Society, MSFDS transformed Manipur into a variant hub of cinema with film festivals, post screening Q&A with directors, masterclasses,  talk series, retrospectives of masters,  film quiz, cine dialogues and honouring of pioneers and celebrities of Manipuri Cinema, drawing steady streams of crowd to the palace auditorium of MSFDS, the venue of the celebrations where a 20 metre tall monolith stands as memorial stone of Manipur Cinema, unveiled by the Hon’ble Chief Minister, N. Biren Singh during the inauguration of the yearlong golden jubilee celebration on 9 April 2021.

During the celebrations, the S.N. Chand Cine Archive & Museum was inaugurated last year. With it, Manipur became the first Indian State to have a Film Archive, equipped with a fully functional Conservatory Room and a Film Vault. The Archive since then succeeded in saving Brogendrogee Luhongba, the first film by a Manipuri film director from being lost by scanning it in 4K.  The first digitalised copy was screened at the last leg of the celebration on 28 April 2022, drawing much appreciation and re-instating Sapam Noida Chand or SN Chand in short in the history of Manipuri Cinema as a father figure. Another achievement of the newly set up Archive & Museum was the successful digitalised of the only remaining celluloid rolls of Mainu Pemcha, the first attempted Manipuri feature film that was never completed.

The five decades of pulsating journey of cinema in Manipur has been amazingly ingenious and courageous, considering the resource-crunch, absence of investment on evolving technology and outreach model to deal with dwindling audiences. Despite nearly non-negotiable challenges, indie films of Manipur have been navigating through with its fierce spirit of independence and aesthetic ascendancy.

“With the new digital ecosystem in place, in 2021, Manipur is embarking on era of the emergence of a vibrant film sector in the state with diverse voices and distinctly personal style of storytelling. For the resurgence of Manipuri Cinema, the state still need a well-designed supportive mechanism in nurturing, skilling and formalising the film practice of the state that will easily revitalise an enabling industry for sustainable growth of responsible storytellers,” says Nilotpal Majumdar who heads the Manipur State Film & Television Institute as its Director.