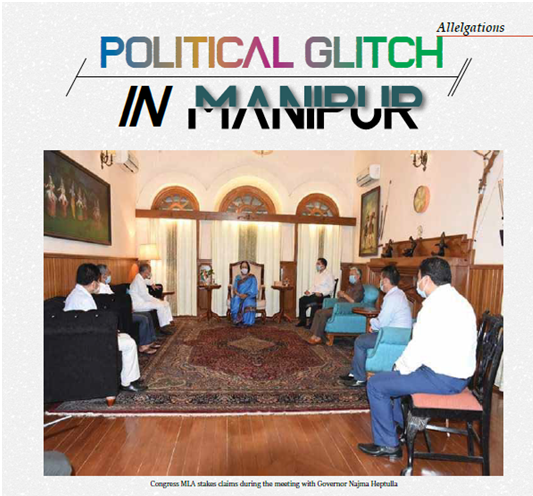 A maverick lady officer of the Manipur Police Service, who was recently stripped of her charge as the Additional SP of Narcotics and Affairs of Border (NAB), alleged that Manipur Chief Minister, Nongthombam Biren, pressurized her to release Lhukhosei Zou, a man accused of being a drugs kingpin. Zou was arrested with a huge consignment of contraband narcotic substance in 2018 after the Chief Minister himself personally authorized the arrest.

Zou, an elected BJP representative to the Autonomous District Council, ADC, of Chandel, was then serving as the Chairman of the ADC Chandel, a powerful post equivalent to the CM in the district level.

The sensational revelation of MPS officer, Thounaojam Brinda, appeared in her sworn affidavit submitted before the Manipur High Court on 3 July, in connection with a suo moto criminal contempt case registered by the High Court against her and others, against her facebook reaction on the matter of granting three weeks bail by the Court to Lhukhosei Zou. Brinda was critical of the judiciary after the special court of Narcotic Drugs and Psychotropic Substances (NDPS) Act, granted bail to Lhukhosei on medical ground.

Seen as taking side against CM, English daily published out on Imphal, largely considered as the mouthpiece of the BJP, published almost the whole content of the affidavit, adding a new twist in the ongoing internal campaign in the BJP to oust the incumbent CM, the first BJP CM of Manipur, Nongthombam Biren. Upon examining the affidavit as well as media interviews given the former Additional SP NAB, it becomes clear that the alleged pressure never came from the CM directly to her.

Chief Minister, N. Biren Singh had time and again withstood all campaigns to dislodge him from power from within and outside. In fact, just prior to the election of the alone Rajya Sabha seat, held in 19 June, it looked like the days of N. Biren Singh as the CM of Manipur were numbered.  But he managed to beat the Congress and win the Rajya Seat by 4 votes.

Even the Trinamool MLA and lone independent MLAs who had supported the BJP led government all along withdrew their support and joined the Congress.

This was not all, three BJP MLAs simultaneously quit the saffron party and resigned from the legislative assembly citing the same reason.

This development had technically reduced the Biren Singh Government into a minority.

BJP, on the contrary, had won only 21 seats. However the saffron brigade took the Congress by surprise and managed to put the ruck out of the Congress.

Besides ensuring the support and confidence of the 4 NPP, 4 NPF, one each from the LJP, Trinamool and an Independent, the BJP roped in a Congress MLA of Andro constituency and came to power with 32 (21 + 11) seats.

In the run up to the Rajya Sabha election where the BJP had nominated Leishemba Sanajaoba, the titular king of Manipur as its candidate, acting upon the Supreme Court order, the Manipur Speaker had disqualified the Congress MLA from Andro, Thounaojam Shyamkumar Singh, citing anti defection laws. Shyamkumar was till then serving as a cabinet minister in the Biren Singh government.