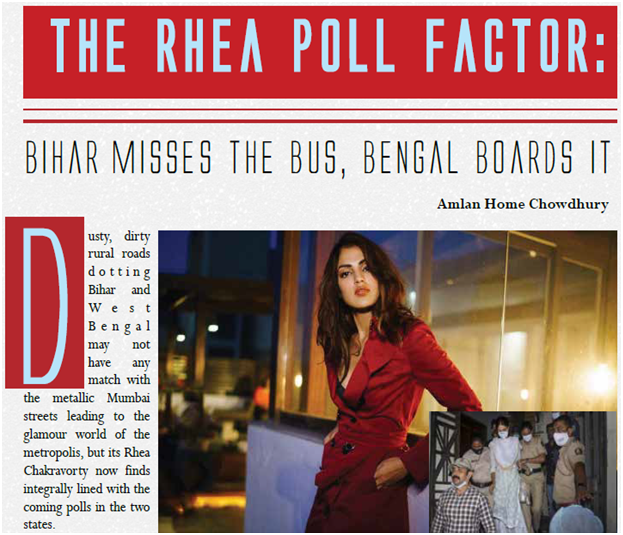 Perhaps for the first time in the poll history of India, a starlet and model practically divides the poll campaigns in the two states along the party lines of UPA and NDA.

The Rhea-Sushant episode with all its tragic touch is developing fast as new twists are getting added to it on every passing day which we all read in the newspapers. That is nothing new. What is new; however, is its political implications in poll-bound Bihar and West Bengal.

Surprisingly, Nitish Kumar, the Bihar Chief Minister, most vocally demanded a CBI probe into the Sushant Singh Rajpur-Rhea Chakravorty case and succeeded in it, yet his JD (U) and ally BJP failed abysmally to cash upon it politically.

Besides, the state’s youth voters now are condemning Nitish for making a suicide case rather suicidal for Bihar as they still depend on Maharashtra so much for education, training and jobs. They feel by hyping this issue and snatching the investigations from the Mumbai Police to the CBI, Nitish has done more damage than good.

This youth brigade even alleging Nitish did it purposely to divert the attention of Biharis at this poll-time from such burning issues as there is lack of educational infrastructure in the state, unemployment, desertion of the state by the educated youth, flood problems, unemployment and migration.

The Sushant Singh Rajput-Rhea Chakravorty factor also is not being hyped by the UPA, mainly RJD and Congress to the extent they were expected to. It is no doubt an electoral issue but its current playing up proves highly polarized Bihar politics still attaches more importance to the caste factor than the sad demise of a son of the soil of this state: Sushant Singh Rajput.

In fact, the abysmal defeat of Nitish resulted out of the fact that the Sushant-Rhea case now has taken a new turn with the tag of celebrity drug-addiction of Bollywood netting many film-wallahs in it.

Soon after it surfaced that Sushant was an alleged drug addict and also being suspected of (alleged) money laundering, Nitish suddenly fell in studied silence. He is not even fomenting the son-of-the-soil factor for Sushant who met his very tragic end.

In fact, he did not study earlier that the case will take such a sudden somersault of different kind. After initial hyping, no Bollywood persons are now focusing on it after some of them got embroiled in the drug-issue.

The Bollywood now is falling silent over the whole issue with some of the celebrities even siding with Rhea. Apparently, Nitish did a political miscalculation.

A section of youth is flooding the social media alleging that he, as Chief Minister, did nothing for the youth. Now how come he is trying to champion the Sushant-cause?

The abysmal failure of political parties of poll-bound Bihar – both belonging to the NDA and UPA blocs – can be gauged from the fact that even a RJD leader recently said a true Rajput (meaning Sushant) would rather fight odd circumstances rather than commit suicide.

Bihar, going to polls this year, apparently missed the bus. But Bengal going to polls early next year has boarded on this political bus with the Congress clamouring the most, somewhat putting both BJP and the Chief Minister Mamata Banerjee in problem.

Rhea Chakravorty may not be a political issue in Bihar but she is a big poll-issue now in West Bengal with the Congress first raising the issue of her being a daughter of Bengal. The feminists and human rights zealots are also supporting her.

Mamata Banerjee has not come open in support of Rhea as this may antagonize the Bihari voters of Bengal. Mamata currently needs the support of non-Bengalis and non-Hindus greatly as the Bengali voters and Hindu-chunk are sharply divided now due to inroads made by the BJP in the state.

On the other hand, the Congress too is hitting her hard and even advocating for contesting the next year’s assembly poll in alliance with the Left Bloc.

This may not be much of a problem for BJP but will certainly mean major issue for Mamata’s ruling Trinamool Congress as this party primarily depends on the minority votes and positive swings of non-Bangla speaking votes, mainly Bihari vote-chunk.

Boarding on the Rhea-bus, the West Bengal Chief of Congress Adhir Ranjan Chowdhury recently held a mass rally in Kolkata in support of (Rhea)-Chakravorty.

This, however, had repercussion as Bengalis now are condemning Dilip Ghosh for terming Rhea a criminal thus, alienating a section of upper-caste Brahmin voters. Incidentally, Ghosh is none to say, judicially, that Rhea is a criminal as her case is sub-judice and no one is a criminal unless ruled by the court.

Interestingly, like Nitish Kumar of Bihar, the BJP in Bengal failed to foment the caste issue but Adhir Ranjan Chowdhury did. He went on record to say that Rhea is a Brahmin and moves are afoot to complicate her in a false case.