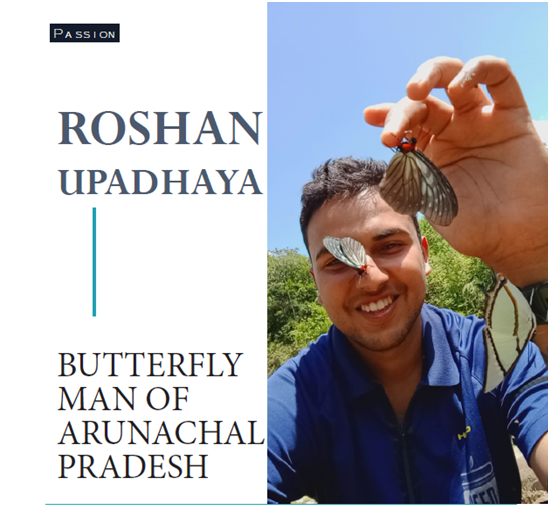 When one has that passion and focus for something there can be nothing to stop from achieving the desired goals. Armed with sheer grit and determination one can easily follow the passion even when the call of duty is hectic. Here is a story of a young man filled with passion to the brim for nature photography and has been receiving recognitions one after the other. Someone who has turned his passion for photography into a medium to educate and create awareness on the importance of nature.

Roshan Upadhaya, 27 years old is a police constable having already served for eight years now. A photography enthusiast, since his schooling days, he would click images on his phone, it was only after landing up a job as a policeman that he bought his first DSLR camera and began capturing the sights and endowments of nature.

Roshan Upadhaya currently holds the record of the highest number of butterfly species, 140 to be precise, captured through his lens. Prior to him Nawangla Bhutia, also known as 'Butterfly Man of Sikkim' was holding the record as recognised by the Limca Book of Records. Roshan considers Bhutia to be his inspiration and the person who motivated him to break his record. He recalls that when the record was broken by him it was Bhutia who felt the proudest.

Roshan was recently conferred with the Honorary Degree of Doctorate in Record Breaking (Honoris Causa) by the World Records University on 18 December, 2020 for capturing 140 species of butterflies. The certification partners were Vietnam Records Association, Asia Book of Records, Nepal Book of Records, India Book of Records and Indo-China Book of Records. The WWF India had selected his entry as a winner in the Photography Competition of the Butterfly Festival 2019.

In November, 2019 Roshan was conferred with a certificate by the India Book of Records for 'maximum number of butterfly species captured by a photographer', 140 in total. Again, in the succeeding month of December, the Asia Book of Records also conferred upon him with a Grand Master Certificate for capturing 140 species of butterflies and fir having an extra ordinary collection of pictures with butterflies’ fir, lovingly perch on his body as confirmed in the date for conferment.

Butterflies are not only attracted towards his lens but also his body. He has shared many pictures and colleagues have also witnessed butterflies perched on his face, hands, lips and even atop his nose. His love for butterflies runs deep and that is manifested with a tattoo (of butterflies) on his left forearm. He was overjoyed when the next day after getting the tattoo, some Flying Jewels landed on the tattoo.

Roshan was born on 5 August, 1993 to Sri Veshraj Upadhaya and Smti. Damayanti Upadhaya in Miao, a sleeping little town and gateway to the famed biodiversity hotspot of the eastern Himalayan region, the Namdapha National Park with a unique record of being the only park where all the four big cats are found besides other flora and fauna endemic to it. He did his schooling from the Government Higher Secondary School at Miao and subsequently was inducted into the Arunachal Pradesh Police as a constable. His job did not deter him from pursuing higher education and he enrolled for B. Com course at the Jawaharlal Nehru College, Pasighat, and the oldest college in the state.