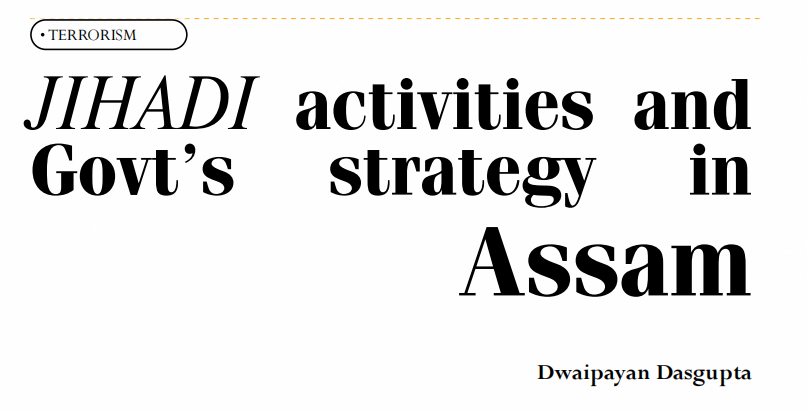 Jihadi activities in Assam are a concerning issue. Stemming their activities is an urgent necessity for the administration in Assam as they are posing a serious threat to the existing peace and harmony in the State. Their sole aim is to spread their tentacles across the State, trigger a reign of terror and foment all forms of violence.  So, in order to carry out their divisive activities, the jihadi elements are moving around in various kinds of disguises such as rickshaw pullers, petty traders, labourers etc, a fact about which the State police have drawn a conclusion after months of continuous investigation and operations against them.

Another startling revelation regarding jihadi activists, after the State police have made several months of interrogation is that the imams and teachers of a section of Madrassas in Assam are working as jihadi elements. Of course, the development has not come as a big surprise. Rather, it is only the tip of the iceberg because there are reports which are indicating that there are many jihadi elements who are also active in various other guises such as drivers, daily wage earners, contractors. A phenomenon that has come to the fore is the recent arrest of a Goalpara-based contractor who was involved in the recruitment of cadres for jihadi groups. With the arrest of the contractor, the police have also started keeping a constant eye on persons hailing from sensitive areas, regardless of whether or not they have any obvious link with any madrassa. The police have suggested that there are reports that members of several jihadi sleeper cells have the guise of various professions such as e-rickshaw operators, petty traders, labourers etc. It may be noted here that Jihadi activities are high in three districts – Goalpara, Barpeta and Bongaigaon.

It may be noted that interrogation of arrested jihadi elements during the past couple of weeks has confirmed that they have links with global terror outfits including Al-Qaeda in Indian Sub-continent (AQIS) and Bangladesh-based Ansarullah Banga Team (ABT) also known as Ansar Bangla. Many of them are reported to have admitted during the interrogation that they have also received training from these terror groups. According to a news report, the ABT is implicated in various kinds of terror activities including abduction, murder, bank robbery etc. Banned by the Bangladesh government way back in May 2015, the outfit is said to have connections with Islami Cahhatra Shibir, the student wing of Jammat-e-Islami, a political party of that country. It is disappointing that Ansar Bangla has been using a number of madrassas in Assam, particularly in those districts which are inhabited by a fairly good number of Muslim population, who are of the present-day Bangladesh or, former East Pakistan origin. The State government, however, has already sealed two madrassas for their jihadi link. The government has the policy of closing them if it gets any concrete complaints regarding their jihadi link.  There is, however, no government madrassa in the State. The government-run 750 madrassas have already been closed down. However, religious madrassas have been allowed to continue in the State.