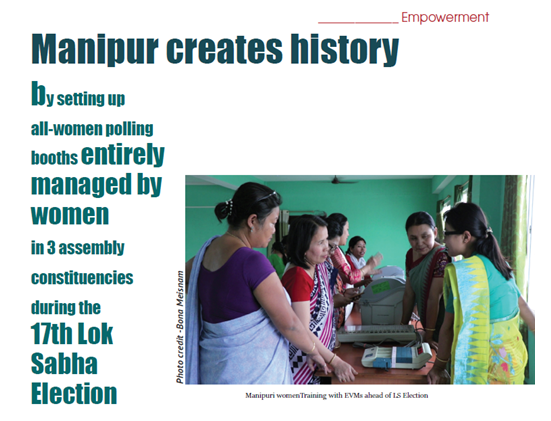 For the restive border state of Manipur, the 17th Lok Sabha election will forever remain special as it is during this parliamentary election, Manipur entered the history books as the first Indian state to have all-women polling booths in at least three assembly constituencies, wholly managed by women poll officers. As per the Election Commission's (EC) directions to set up polling stations entirely managed by women, such booths are set up across the country but Manipur takes the cake by having three assembly segments manned only for women poll officers.

Manipur has a population of roughly 2.8 million, out which 19, 59,429 are eligible to vote. While 10,31,803 voters belonged to the Outer Manipur Seat which went to poll in the first phase on 11th April, 9,27,626 voters voted to elect their representative for the Inner Manipur Seat during the second phase on 18th April.

The State CEO, P.K Singh credited that the idea of all women polling station in one assembly segment to Dr. Rangitabali Waikhom, the Deputy Commissioner of Imphal East district who happens to be a women officer, assisted by mostly women AROs. “Manipur is known for its women power. Most movements on social issues have been headed by the Manipuri women. We thought election is the right time to showcase this women power through this kind of an arrangement. Interestingly the DEO, district election officer and AROs were keen to set up all women polling stations as many as possible. The DEO came up with the idea of converting an entire assembly segment into all-women polling stations. We seized the opportunity as we though it is very do-able. Rangitabali identified Yaiskhul for this purpose.”

Speaking on how she came up with the idea of this historic exercise, DC Imphal East, Dr. Rangitabati Waikhom said, she attended the International Women’s Day recently and was struck by the idea of gender balance and gender equality. However, when she and her AROs started planning for the polling exercise, she was discouraged by the response of the women employees who tried to shy away from taking up election duty.  Convinced that women would be more efficient and the idea of all women polling stations has been a major statement for the women power of the state, she held two motivational sessions with over 280 identified women employees which fired the imagination of the women.

All selected women were made to undergo a series rigorous theoretical as well as practical/ hands-on training. The faith the lady DC had bestowed on them and on their capability gradually transformed their confidence.