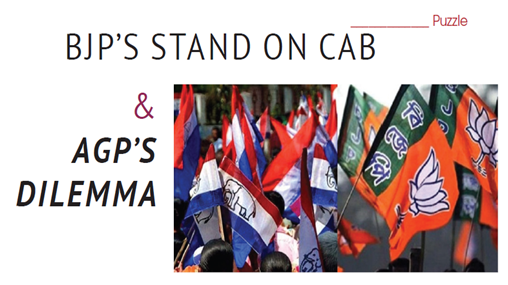 As the third and final round of the Lok Sabha elections in Assam – which incidentally sends 14 lawmakers to the union legislature – is on April 23 last, the one single but crucial question in a curious mind is, will the Asom Gana Parishad (AGP), this time be able to retain at least one of the three Lok Sabha seats: Kaliabor, Barpeta and Dhubri, or will it fare poorly as it did in the 2014 Lok Sabha polls in the State when it drew blank?

Although it is not an easy job to predict at this stage its poll prospects till last ballot paper is counted, even then, this time too as in 2014, it may come a cropper to manage even a single seat; and, if it comes, it is hard to take any knowledgeable person by utter surprise. However, the AGP sought four seats from the BJP to field their candidates in the Lok Sabha polls in the State. But after a bargaining, the regional party was given three seats in addition to the offer of a Rajya Sabha seat which is likely to fall vacant in June.

So far as the ruling party  BJP is concerned, there is likelihood of its impressive performance  as in the 2014 Lok Sabha polls,  when it had notched up as many as  seven  out of a total 14 seats in the State with the highest vote share of 36.86 per cent against the  Congress’s 29.90 per cent.  The BJP’s stand on the controversial Citizenship (Amendment) Bill, or CAB in the Parliament will be reintroduced by it, if voted to power again, must have presumably brightened its poll prospects in the Hindu-minority areas in the Brahmaputra valley and Hindu Bengali-dominated areas in the Barak valley.  The decision will presumably help avert a possible splitting of a huge number of Hindu minority votes, especially those of the Bengalis between the ruling BJP and its arch rival Congress in particular, which is all the more important for the former in terms of election. If it works, the BJP can win seven or more seats.

The 2016 Bill, however, seeks to grant citizenship to non-Muslims from Bangladesh, Afghanistan and Pakistan who have come to India for fear of religious persecution.  That the Central BJP leaders are determined to bring it to the parliament again if mandated to rule the country is well reverberated in its poll manifesto, titled Sankalp Patra. It was released by the Prime Minister, Narendra Modi, the party Chief Amit Shah and other senior BJP functionaries, significantly on April 8 last, just two days ahead of the first phase of Lok Sabha elections in New Delhi. The manifesto focused on several issues concerning the Northeast, including peace talk militant outfits.  The Prime Minister Modi while releasing it stated, “We are committed to the enactment of the Citizenship Amendment Bill for the protection of individuals of religious minority communities from neighbouring countries escaping persecution.”

However, the regional party at present is passing through a trying time.  The BJP’s decision on the Bill has put them in a tight spot just on the eve of the elections as major section of people has been opposing the CAB.  But a section of the senior AGP leaders do not seem to subscribe to this theory. Ramendra Narayan Kalita, general secretary of the regional party, was reported to have claimed that the BJP’s stand to make CAB part of its manifesto will not create any confusion among the alliance partners. He said, “It will also have no impact on our electoral prospects in the parliamentary polls”.