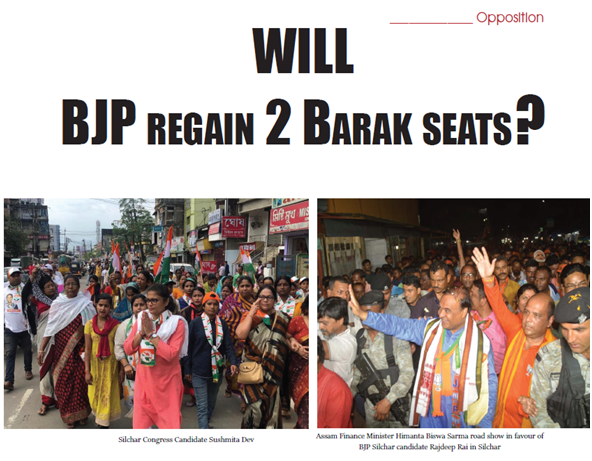 Vote for the 2 seats of Barak Valley, Silchar and Karimganj, were polled on April 18. The fate of candidates is sealed in ballot boxes. Till the results are out, they sit with fingers crossed. But, arithmetic and chemistry both will be at play, to predict the winner. An analysis of it at the same time is also a part of the responsible media.

After the two mammoth road shows in quick succession at Silchar, one by Congress general secretary, Priyanka Gandhi, and the other by BJP minister and NEDA convener, Himanta Biswa Sarma, end in support of their candidates, Sushmita Dev, and Dr Rajdeep Roy, respectively, questions are being raised in political circles, will they convert into votes?  Priyanka Gandhi did take an edge over Himanta in attracting crowd and played to the gallery to woo voters for Sushmita whom she described as ‘dynamic and active’ to work for the people and their development.While she covered the rally route of 3 km on open truck, Himanta walked all along and came in close rapport with the masses and made impassioned appeal to them to ‘continue the process of development initiated by the Prime Minister Narendra Modi and Chief Minister Sarbananda Sonowal.’ Both the ‘tsunami of public support’ was a new experience for this town and focus of hot discussion. Buoyed by the show of strength, BJP and Congress are optimistic about the victory of their candidates. While Congress claimed a turn up of 3.5 lakh people in the rally, BJP vouched for the presence of lakhs of supporters. Prior to it, Prime Minister Narendra Modi addressed record-breaking crowd rallies twice at Ramnagar near this town to drum up support for saffron candidates.

To claim victory on the basis of crowded rallies and road shows will be going too far. There are many factors which need to be counted. An analysis of the votes and voting pattern on Silchar Lok Sabha seat since the emergence of BJP wave in 1991 shows Congress has won three times and BJP four times and it has always been a straight fight. Apart from the Hindu votes of 41% which include Meitei, Bishnupriya and Hindi speaking, Muslims count for 40%, tea tribe 13% and tribal groups 6%. The simple arithmetic is consolidation of Hindu and tea tribe votes and fragmentation in the Muslim and tribal support base can ensure the passage to victory for BJP. BJP’s support for CAB is expected to keep Hindu votes intact.

Himanta Biswa Sarma’s hurricane meetings penetrating deep into tea belts and tribal pockets have evoked huge response.  The welfare measures taken up by the Centre and the state have gone a long way to woo the tea tribes. Moreover, swinging of Muslim votes in favour of NPP candidate Nazia Yasmin Mazumder in absence of AIUDF in the fray will also be a deciding factor. Dr Rajdeep Roy claims with confidence the myth Muslims do not vote for BJP will be broken. No exaggeration, development is the greatest plank of BJP to reach out to voters.

Opposition of Congress to CAB has no doubt put Sushmita Dev in discomfiture and the party has no salvos to fire at its arch rival except raising the slogan, “chowkidar chor hai” during the road show. This has not gone well into the psyche of people here. The road shows are not the indicator of victory. Despite huge turnout at Priyanka’s road shows in UP, all the national news channels predict only 2 seats for Congress. Himanta Biswa Sarma on the battle ground is a seasoned politician and knows the alchemy of engineering and poll management. The 11,91, 174 voters have sealed the fate of two titans, Dr Rajdeep Roy and Sushmita Dev in ballot boxes.

Just in the aftermath of the election, BJP candidate Kripanath Mallah, Congress nominee Swarup Das and AIUDF contender Radheshyam Biswas vying for Karimganj L S seats (SC) claimed before the media their win with confidence. Of course, the key to the question who the winner is lies in the ballot boxes sealed with the votes polled.  But, an analysis of the trend, mood and the overall reactions of electorates as well as the voting pattern does give indication of prospect of candidates in the reckoning. Here the fight is triangular despite the tacit tie up between Congress and AIUDF.