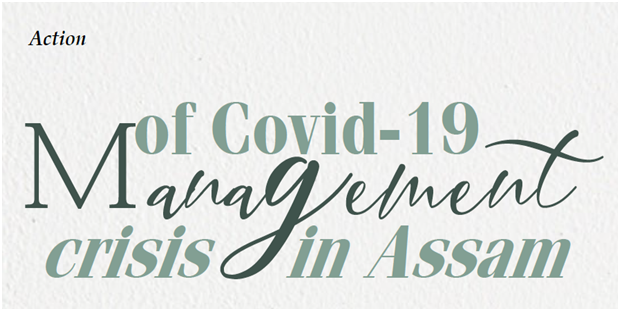 Called wittily as the ‘Far East’ of India, as they term it as “out of sight out of mind of Delhi”, Assam, as everyone is aware of, is currently passing through very trying times in economic growth, along with the rest of the country owing to a virus called corona virus epidemic (Covid-19), which incidentally originated in the central Chinese city of Wuhan in Hubei province in December last year. It is indeed so infectious and deadly that nobody possibly seems to have ever dreamt in their wildest dream that a day will come when such a viral virus  across the globe, will be seen to be wrecking havoc ceaselessly not just across our country but all over the world as well, like the truly devastating one which is notoriously known as ‘Spanish flu’, of 1918-19 when the world war I was at its zenith, and killed as many as 500 million people around the world.

The worst-infected countries such as the United States, Italy, Spain, France in particular, are left on a sticky wicket with the corona virus pandemic taking thousands of lives on average almost ever alternate day, if not every day.

Since there is so far no sign as of today visible at the end of the long tunnel of the virus petering out in the immediate future due to the lack of much-need vaccine  to fight against the invisible virus yet to be invented by any country, Assam, along with all other States of the country,  has of late observed a 14-hour ‘Janata curfew” from 7 am to 9 pm on March 22 and a 21-day lockdown from March 24, as part of precautionary measures to contain the outbreak of the novel corona virus pandemic. It is also at present observing an extended 19-day lockdown-2.0 that will continue up to May 3. The response to the ongoing lockdown was on the whole spontaneous across Assam, to save the city of Guwahati which was essentially on the top of the remaining cities and towns in violation of traffic rules during lockdown. As a result, thousands of two-wheelers and cars were seized and the owners were charged heavy penalties by police fetching the administration a huge amount of money, as a step to stem the spread of the virus as they drove their vehicles on the streets without permission.

There is no gainsaying that the prolonged lockdown or shutdown, has supposedly taken a heavy toll on the key sectors of economy of Assam such as tea, vegetable production, tourism industry, etc; resulting in the huge loss of revenues of the State Government. For example, the tea industry which is the backbone of the Assam economy, has reportedly incurred a whopping amount of Rs 1,218 crore by the way of revenue till mid-April this year due to the nationwide lockdown, report by the North Eastern Tea Association. The small tea growers are also facing economic hardships past one month in view of the tea gardens coming under the nation-wide lockdown . Same is the state of around 3.75 lakh workers on a casual basis. Small growers are also facing financial hardship. That is why, the All Assam Small Tea Growers Development Cooperative Society Ltd; has of late urged the government for an economic relief.

What is, however, a laudable decision on the part of Dispur that it has finally ordered tea industry to restart activities from April 18, with 50  per cent work force, palpably given the sorry state of its economy, more importantly, the live and livelihood of the tea workers,  with some restrictions.  The vegetable growers are also facing similar problems due to the loss of the vegetable yield to the tune of over 10,000 MT following the lockdown till April 18, as has been reported. The vegetable and agricultural labourers are equally allowed to resume operation, subject to the same virus-stemming provisos.  Yet another worth-praising piece of act of the health department has been that under its banner as per its decision, the ASTC has started ferrying around 1 lakh people stranded in various parts of the state in view of the ongoing lockdown for three days from April 25. The department has also eased the return of nearly 500 students in Assam from Kota, Rajasthan.

There was initially some element of scepticism among a section of people regarding the State government has all the necessary equipment and adequate government-run hospitals, isolation and quarantine camps, PPE kits, air-conditioned ICU beds, rapid antibody testing kits, ventilators, protective face mask for medicos, nurses and upgraded laboratories to test the Covid-19 cases, which has rapidly spread everywhere in the country.  It is normal that this kind of doubt on this count may arise among them because Assam is a fund-deficient State, and it is now running short of revenues due to the prolonged lockdown. Even then, there is no valid reason at all for them to worry about, because the competent Assam Health Minister, Dr Himanta Biswa Sarma, has taken up the leadership in managing the looming crisis emanating from the corona virus by this way or that way. Indeed, it is an uphill job to balance the grim scenario, as everyone is well aware of.  But nevertheless, Sarma has quite meticulously and assiduously already arranged all these essentials, besides getting ready the five medical college and hospitals and existing civil hospitals in different parts of the state in the past few days much before it raised its ugly head.  Not only that on war footing he has even built up quarantine, isolation camps in various parts of the state. For instance, at Sarusagai stadium, Guwahati, the state government has set up 1000-bedded quarantine rooms. The purpose is containing the spread of the corona virus at any rate. In the meantime, 70,000 people kept under quarantine were released.

To note precisely, the state has received much-needed 9,600 rapid testing kits, and an assignment of 50,000 PPEs from China. The stock of PPEs in the state now stands at ,150,000.  So, Sarma is well prepared with all these medical equipment to face up to the challenge. Interestingly, he has already taken on the first problem when a total of the 34 virus-infected persons were admitted in different hospitals and medical college hospitals and civil hospitals in the state for tests.