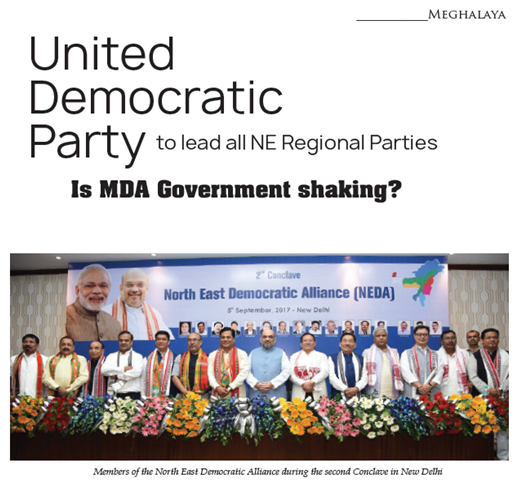 The decision was taken after Bharatiya Janata Party (BJP) President Amit Shah categorically said at a party rally in Assam that his party would revive the Citizenship (Amendment) Bill if it comes back to power in the country. His remarks provoked protests from various political parties and indigenous groups in the Northeast. United Democratic Party, Vice President, Allantry Franklin Dkhar said that the decision of the UDP to come out of the NEDA was taken on February 10th after eleven regional political parties from across the North Eastern States met in Guwahati on January 29th which unanimously resolved to oppose the Bill.

The UDP had also announced to unite all regional parties to represent the region in the National capital in the future. NPP Meghalaya State President W. R Kharlukhi viewed this move as the right path to look upon, which will also boost the voice of the region in Lok Sabha. Kharlukhi added “for so long NE Regional parties been pawns in the hands of the National Parties and it is high time we take the power in our hands by uniting together and this will turn North East into a force to be reckoned with, in the National political landscape. The UDP has strong ties with regional forces like the AGP from Assam, MNF from Mizoram after they parted with NEDA which host BJP as its founder. It also appeal to all NE Regional parties to snub NEDA-BJP led alliance and work together to be the common voice of the region. If the idea of UDP forming its own NE political Alliance in the future becomes reality, it is likely to name as North East Secular Front.

The North-East Democratic Alliance (NEDA) is a political coalition that was formed on May 24th 2016 by the Bharatiya Janata Party (BJP) along with regional political parties of North East India like Naga People's Front (NPF), Sikkim Democratic Front (SDF), People's Party of Arunachal (PPA), Asom Gana Parishad (AGP) and Bodoland People's Front (BPF) in Northeast India. The motive of the new political front was to protect the interest of the people of the region as well as uniting non-Congress parties in Northeast India.