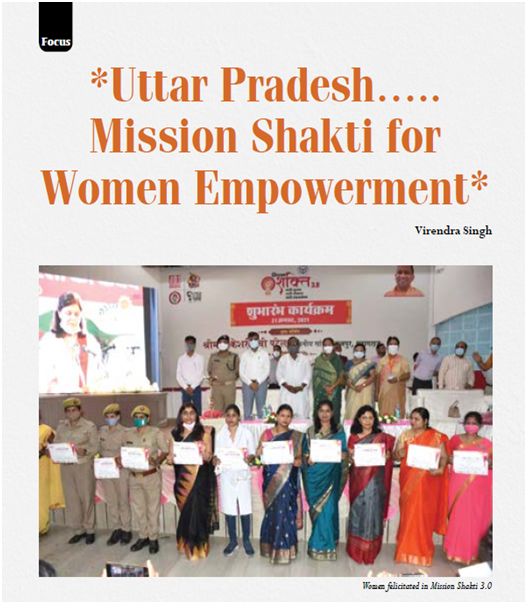 The Uttar Pradesh Chief Minister Yogi Adityanath directed the departments of home, education, health, women and child development, etc., to draw up a list of programmes.

The Yogi Adityanath-led Government came in for praise from a parliamentary panel headed by a Congress Member of Parliament over the issue of empowerment of women. The Parliamentary Standing Committee on Home Affairs lauded the Uttar Pradesh Government for tackling violence against women.

Appreciating the Uttar Pradesh Government, the parliamentary committee headed by Anand Sharma mentioned, “The committee appreciates the initiatives, like interlinking of various departments and creation of a single-window system to help women victims of violence, taken by the state government of Uttar Pradesh. The committee, therefore, recommends that other states should also establish such synergy and coordination amongst various departments concerned with the safety and security of women and children”. It is evident from the report that Uttar Pradesh has set an example for other states.The state has established ‘One Stop Centre’ in all districts for women suffering from violence and so far around 1,04,859 women have been benefited from these centres wherein complainants are provided services like police assistance, medical treatment, legal aid, psychological counselling and temporary shelter.

The safety of women has been the top priority of the Uttar Pradesh Government ever since Yogi Adityanath assumed the office as Chief Minister in 2017. The state government has not only taken appropriate steps to protect women from all kinds of crimes but has also ensured strict punishment to the perpetrators so that potential criminals mend their ways. This approach has borne results and has ensured that Uttar Pradesh leads the way in controlling rape and other heinous crimes against women.