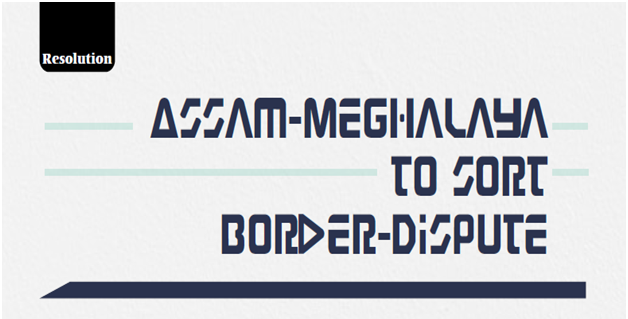 The Chief Ministers of Assam Himanta Biswa Sarma and Meghalya Conrad Sangma decided to adopt a "pragmatic approach" to amicably resolve the longstanding inter-state border dispute between the two states. The chief ministers of both the states met at Shillong with Conrad Sangma claiming 12 disputed places belonging to Meghalaya while Sarma justified with documents that those places belong to Assam. After detailed discussion, both the governments decided to move from status quo to solution, according to an official source. Both states have decided to form three-member committees on each side, which will be headed by Cabinet Ministers. It was agreed to discuss all the 12 places one by one and review claims, if possible, both the Chief Ministers will visit all the places.

Assam, which witnessed bloody clashes with its other neighbour Mizoram recently, after intervention by the Centre, to settle the dispute, decided to resolve the border conflict issue amicably. It also revoked advisory issued earlier which warned its citizens from traveling to Mizoram.

The dispute with Arunachal Pradesh and Nagaland are pending in the Supreme Court, the Assam CM said. With Meghalaya and Mizoram, there is no litigation and the matter can be resolved through mutual negotiations.

Assam Chief Minister Himanta Biswa Sarma told the media persons that it was a very fruitful discussion and they came to a common understanding committed to resolve the border dispute. They decided to visit all the 12 sites together. According to him, the relevant merits and demerits of claims and counter claims will be discussed at the actual area of differences. He added that it may not be possible to resolve the entire dispute at a time, but keep on resolving this dispute one at a time.

The Assam Chief Minister was pleased to come to a common understanding with the need to travel beyond the status quo, maintained in the past but with commitment to resolve this dispute. He wants to give more importance to discussions and review so that a lasting solution can be reached.

If there is a need to redraw the borders, both the state governments will recommend it to the Centre as the Constitution permits only the Parliament to decide on the boundaries.

Border disputes between the two states date back to the inception of Meghalaya in January 1971 when two districts of the then Assam - United Khasi Hills, and Jaintia Hills and Garo Hills - were carved out to form a separate state and the then unified Assam's capital Shillong was shifted to Dispur, while Shillong became Meghalaya's capital. It had challenged the Assam Reorganisation Act, 1971 leading to disputes related to 12 areas in different parts of the shared 884.9 km long border. The six sites taken up in the first phase are Tarabari, Gijang, Hahim, Baklapara, Khanapara-Pilingkata and Ratacherra as the disputes there are not complicated and the committees will hold deliberations to narrow down the differences, Sarma said. The areas fall in Cachar, Kamrup Metro and Kamrup Rural in the Assam side and West Khasi Hills, Ri Bhoi district and East Jaintia Hills in Meghalaya.

On the other, Meghalaya Chief Minister Conrad Sangma considered five aspects in resolving the disputes such as historical facts, ethnicity, administrative convenience, mood and sentiments of the people concerned and the contiguity of the land.