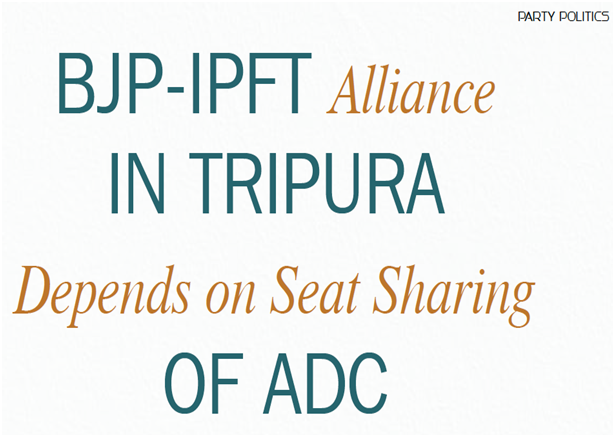 The seat sharing deal between ruling BJP and its ally in Tripura government Indigenous Peoples Front of Tripura (IPFT) in upcoming Tripura Tribal Areas District Council (TTAADC) elections expected to be held within next three months has appeared to be the main trembling block for survival of the alliance. The IPFT joined hands with BJP before 2018 assembly poll with the assurance that the later party will facilitate them to achieve their ultimate target of empowerment of ADC and enjoy autonomy in true sense. The BJP leaders were committed to give free hand to IPFT in running the administration in ADC besides, elevating the status of ADC. Tripura ADC was established in 1983 for socio-political empowerment of tribals in Tripura. Afterwards, there were several changes in the administration but no improvement in ADC functioning.

Even after 37 years of its existence, Tripura ADC is like a department of the state government and economic and political empowerment of the council are still a matter of discussion. The tribal parties of the state have been demanding direct funding and devolution of taxes from the centre and provision of gap grant from the Finance Commission. The IPFT, which began its political journey in 2000 with a sole objective to achieve Tipraland (state within the state of Tripura) is still fighting for its existence on the same demand. Though in the hills IPFT has continued to campaign the slogan of Tipraland and in the plains they speak about the empowerment of ADC to remain in power with BJP.

The IPFT President and Revenue Minister N C Debbarma made it clear that his party will fight alone in upcoming ADC poll if they don’t get the lion share of seats for contesting. Earlier, also in last Loksabha and panchayat elections, IPFT fought against its partner BJP and showed a considerable strength in tribal areas. The party will continue the alliance with BJP in upcoming ADC elections if they get 22 seats out of 28. The party fought together with BJP in the last assembly elections and won eight seats and formed the government.

IPFT President N C Debbarma stated “According to the principle, we both have to fight together in the upcoming ADC election but it depends on the seat adjustment. Since, IPFT is formed with the principle to work for indigenous people of the state and before forging alliance, BJP leaders have committed us to run ADC, we expect maximum seats”.

However, parties will hold a discussion on the upcoming poll to fight together because if both the parties don’t fight together then the opposition parties will get the benefit. The IPFT has been in electioneering for past six months and ready to face election at any moment, he said. The IPFT has intensified poll campaigns in full-swing soon after the high court has ordered the election before May. The leaders have been addressing the small gathering at village levels as part of their poll strategy and formal campaign would be started after formal announcement of the elections. Even being in the government, IPFT had been opposing the Governor’s rule in ADC and asked to give the charge of ADC to the State Tribal Welfare Minister Mevar Kr Jamatia who is also the General Secretary of IPFT. Instead of allowing Mevar to get into ADC, Biplab Kumar Deb government had appointed a former Chief Secretary G K Rao as an administrator initially for six months. Later, in November last year, it was further extended for another six months, which enraged all the tribal parties including IPFT and opposition CPI (M) and Congress. Challenging the Governor’s rule, two citizens of ADC filed public interest litigations in the high court of Tripura.