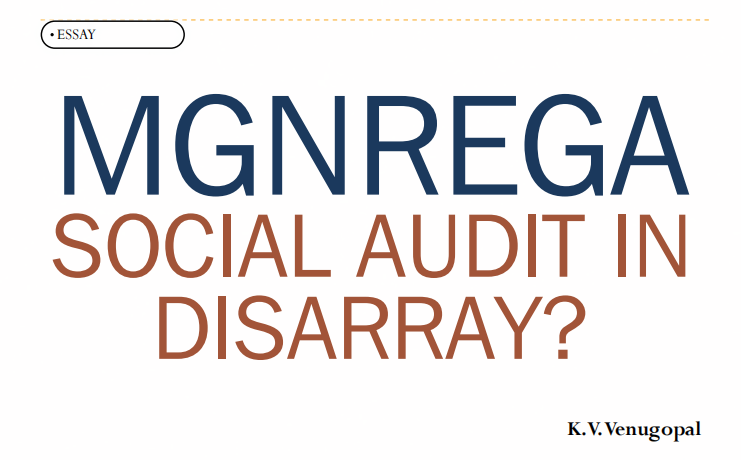 The alleged misuse of social audits in Mahatma Gandhi National Rural Employment Guarantee Act is causing concern to the Central government. A recent parliamentary committee report observed that MGNREGA is of considerable importance in a country where a large number of people still reside in rural areas and their day-to-day survival depended on their meagre wages earned from the work allotted by MGNREGA. This was amply evident when the registration for jobs witnessed a steep hike during the covid-19 pandemic period.

However, the alarming situation was noticed when the Union Rural Development Ministry has warned States that failure to carry out social audit of the MGNREGA would invite a stringent action with the possibility of withholding of funds. The moot point, however, is that it is the central government that bears the administrative cost of social audit units, but an inordinate delay in the release of funds has left many of the cash-crunch state units in a pathetic plight. For instance, the social audit departments in Himachal Pradesh, Kerala, Telangana and Chhattisgarh have not received the necessary funds that the Centre owe them and this delayed the audit process, which resulted in the delay of wages meant for the workers ranging from three months to one year.

The earlier MGNREGA, too, had provisions for social audit, but the auditing standards proposed by the Comptroller and Auditor General was issued only on December 19, 2016 with a notification that all social audit units are entitled to funds equivalent to 0.5 per cent of the MNREGA expenditure incurred by the State in the previous year. The audit was bound to focus on proper infrastructure and quality-oriented auditing in a transparent manner under the MNREGA, besides spotting non-accounting and misappropriation of wages, and cross- checking for any procedural error and to ensure course-correction. The fund was released by the Centre in four installments.

The recent findings on social audits by the non-profit People’s Action for Employment Guarantee reveals that eight state social audit units in 2020-21 and nine in 2021-22, have received less than half of the fund. However, Maharashtra, Jharkhand, Uttarakhand, Bihar, Chhattisgarh, and Karnataka had received their share of funds from the concerned ministry, last year. It has been reported that the Bihar social audit unit has not received funds, since April 27, 2020.  It is distressing to note that Maharashtra, Bihar, and Chhattisgarh had not received funds during the period 2021-22 to conduct social audits, despite incurring an expenditure of more than Rs 6,000 crore in MGNREGA in the financial year 2020-21. Adding salt to the wound, the social audit units in Jharkhand, Nagaland, Tamil Nadu, Telangana, and Karnataka were forced to take loans from their respective state governments in order to sustain their operations in a phased manner.

There is no iota of doubt that there has been considerable delay in the disbursement of funds to a few states, because of the overhauling process of the Public Finance Management System. The purpose of forming the social audit units was to curb rampant corruption in MGNREGA scheme. It is imperative on the part of the centre to allot necessary funds to ensure their autonomy, as the states have no meaningful role to play in the financial aspect.