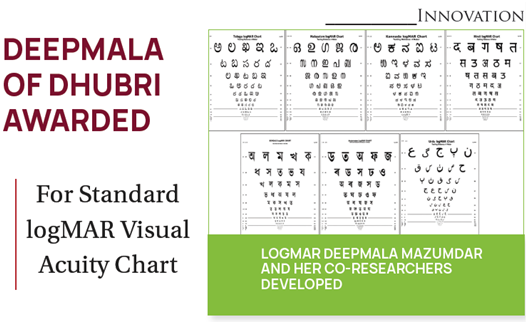 Dipmala Mazumdar of Dhubri town was awarded by All India Ophthalmological Society-Indian Journal of Ophthalmology as best research work for the year 2017-2018 in national level. The award was presented to her and co-researchers by Noble laureate Kailash Satyarthi on the occasion of 77th AIOC on 14th February 2019 in Indore. She belongs to a reputed family of Senpara area of Dhubri town, daughter of Jayanta Mazumdar and Ila Mazumdar.

When contacted by Bijoy Kumar Sharma (Associate Editor of Eastern Panorama), Miss Deepmala Mazumdar told  over phone from Chennai that this work was highly appreciated and hailed at National and International level, as this was first time that logMAR visual acuity charts based on Indian languages was developed successfully.

“I am very happy and feeling a great satisfaction that now with the help of visual acuity charts based on Indian languages, it could be easier to treat the patients with visual impairment. Moreover, receiving the prestigious platinum award from All India Ophthalmological Society-Indian Journal of Ophthalmology from the hand of Noble Laureate Kailash Satyarthi was a huge honour to me and my co-researchers”, she added.

Miss Mazumdar informed that this work would greatly help the community for better and standard vision testing in their native language.

The charts are available from Elite School of Optometry, Chennai on request and for more information please google search "Construction and validation of logMAR visual acuity charts in seven Indian languages", she further informed.