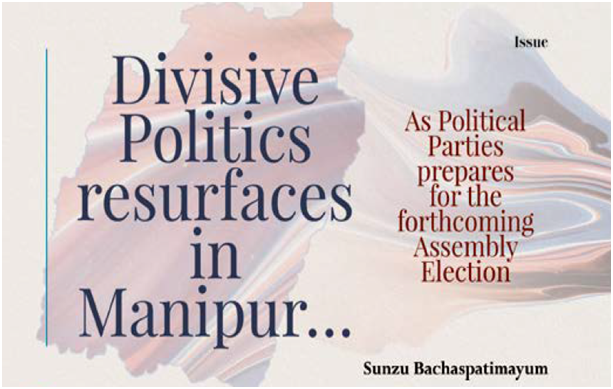 If Northeast India is a region beset with paradoxical complexity that most predominantly centred around identity politics, then Manipur would make the most fitting case to study, especially with the state’s assembly election around the corner.

As usual, the communities are further classified as General, Scheduled Tribes, Scheduled Caste etc. The Meiteis or Meeteis, belonging to the General class, are the majority community, inhabiting the valley and make up 60% of the State’s 3.1 million population. The Nagas and the Kukis, who are scheduled tribes are the two communities whose voices are assertive in state politics. Together, they account for 21 seats in the 60-seat State Legislative Assembly, the remaining 40 seats are represented by the valley.

Although the valley is barely 10% of the total land mass of the state, comprising 22,327 km², it is the most densely populated with over 70% of the population residing on it. With most infrastructural provisions being located, most affluent as well as non-affluent scheduled tribes, invariably own land in the valley. However, the same privilege is not accorded to the   Meiteis/Meeteis as they are prohibited to own land rights in the hill districts as these areas are classified as scheduled areas under the special provision of the Article 371C of the Indian Constitution that prevents ownership rights to non-tribals.

Once a princely sovereign Asiatic State with over 2000 years of written history dating back to 33 A.D., many in the state still question the validity of how the merger of Manipur into the Indian Union was affected in 1949. Quite a few resolute forces have even picked up arms to restore Manipur’s sovereignty, describing Manipur as forcibly annexed. This, coupled with the central Government’s inapt dealing of the Manipuri aspirations, gave birth to armed insurgency. Even though the uprising may be low intensity, it nevertheless necessitated the proclamation of ‘declare area’ to make way for the Armed Forces Special Forces Act, 1958, (AFSPA 1958), giving powers of impunity to the Armed Force in countering the insurgency.

Stories of atrocious, rape and custodial death became the order of the day and it was only in 2009 when the Supreme Court of India took cognizance and ordered the Central Bureau of Investigation (CBI) to investigate 1,528 murders in alleged encounters with the army and police between 2000 to 2012. Since then, human rights abuse records in Manipur have improved remarkably.

Other factors that led to return of semblance of normalcy in Manipur is the process of engaging most armed groups in peace talks, signing a Suspension of Operations (SoO). Even though the armed conflict seems to be waning, the animosity amongst the three dominant communities – the Meitei/Meetei, Naga and the Kuki/Zomi - is as acute as ever. While the Meitei/Meetei is ardently guarding to ward off any threat to the territorial integrity of Manipur, the Naga and the Kukis/Zomi are demanding separate homelands.