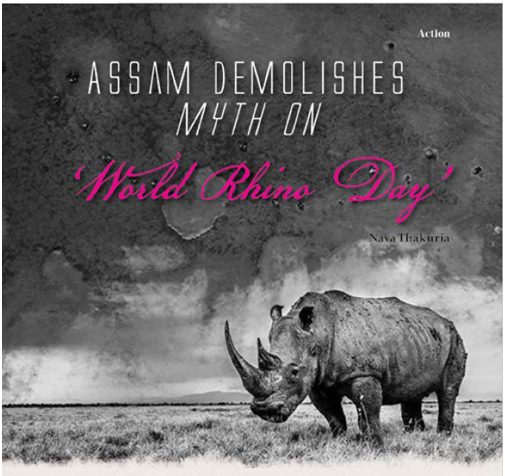 On 22 September, the world witnessed a unique event in Assam of Northeast India, where the authority set 2479 rhino horns on fire as a mission to spread the message that the horns do not have any aphrodisiac value, because of which the gigantic animals, officially known as the greater one-horned rhinoceros (Rhinoceros unicorns),  are hunted in Asia and Africa. The pledge of World Rhino Day was to drastically reduce the incidents of rhino-poaching with the government initiatives and full public support.

Assam forest and environment department prepared for the occasion conducting a verification process for rhino-horns, stored in 12 government treasuries across the state, to conform if there were any fake horns made of bamboo-root or plastics. The authority decided to destroy most of the rhino parts, picked up from the cache of 2,623 horns, which were recovered from poachers, smugglers or extracted from the naturally or accidentally dead ones over the last four decades since 1980. The government, which has otherwise taken zero tolerance policy towards the poaching of wildlife, has preserved 94 horns, based on size and soundness of architecture for academic purposes those will be kept put in a proposed natural history Museum at Kaziranga National Park and Tiger Reserve, which is widely known for over 2,400 single-horn rhinos along with other precious wildlife. Another 50 rhinos linked to various court cases as evidences will also be preserved till those are dismissed, stated State Chief Minister Himanta Biswa Sarma, who led the task at Bokakhat, adjacent to the Kaziranga world heritage site and began with Vedic rituals where a number of priests chanted mantras and took the lead to dispose of the consignment.

With the first of its kind event to destroy rhino horns on such a large scale, the government intends to send a strong message against the poaching of wildlife including rhinos. Claiming that the poachers will have to think now twice, before trying to kill wild animals in Assam, Sarma assured that such activities would not be tolerated. He also informed   that   the   elevated corridor over the highway passing through Kaziranga would be constructed soon for protection of the inmates. Often termed as the black ivory, rhino horns are prized as an aphrodisiac, selling for thousands of dollars per kilogram in the international illegal market. The animal enjoys great sexual power, as its mating time may continue for around 45 minutes (quite higher than any other animal). Many people unscientifically believe that one can achieve the unusual sexual power with the help of rhino horns (using as traditional Viagra). Moreover, the horns are believed to have some medicinal values as the traditional Chinese medicine requires rhino horns that are believed to cure high fever, stomach ailments and even the cancer. China, Taiwan, Thailand, South Korea, Vietnam and the Middle East are known to be huge markets for the horns, where the use of horns for medical purposes and scientific research are legalised. However, the veterinarians claim that there is no scientific analysis that the horns, which are nothing but the compacted form of hairs, can stimulate human sex.

International Rhino Foundation stated that rhinos have walked the Earth for more than 50 million years and once roamed throughout Africa and Asia. At the beginning of the 20th century, the global rhino population was around 5,00,000 and now after 120 years, 28,000 rhinos (including the two-horn ones) are surviving. Deforestation and land clearance for human settlements have already wiped-out rhino populations in Myanmar, Bangladesh, Bhutan, Pakistan, Thailand, Cambodia, Laos, Vietnam, etc.