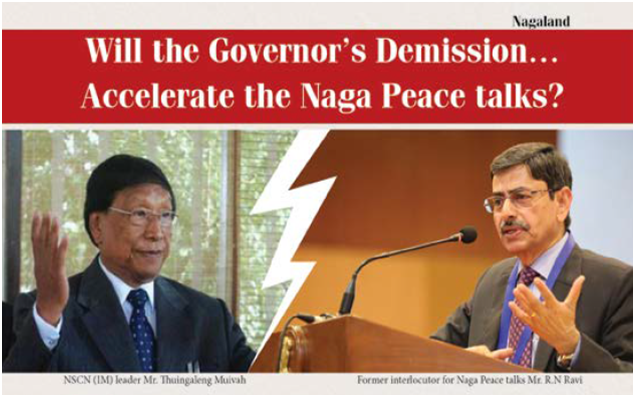 For over six decades, Naga Nationalists have fought the Indian state for a sovereign ethnic homeland that would include Nagaland as well as the Naga-inhabited areas of Manipur, Assam, Arunachal Pradesh and Myanmar across the border. Over the decades, the Naga armed movement split into several factions. Talks between the NSCN (I-M) and the Centre began in 1997, when the rebel group signed a peace treaty with the government.

In 2015, Prime Minister Narendra Modi’s government signed a “framework agreement” with the NSCN (I-M) – a development publicised as a major breakthrough by both sides.

A 1976-batch IPS officer of Kerala cadre, RN Ravi was appointed as the interlocutor for Naga peace talks in 2015. In 2017, the scope of the agreement broadened when Ravi included six other Naga armed groups, now called Naga National Political Groups, in the talks. He helped in signing a second agreement with the working committee formed by these groups on November 17, 2017. The talks were temporarily paused for two years and resumed again in 2019 when RN Ravi was appointed as the Governor of Nagaland.

With time, the relationship between the Naga groups and Ravi soured following which the Naga groups had refused to hold any discussions.  The National Socialist Council of Nagalim (Isaac-Muivah) – the largest of the Nagaland armed groups had demanded Ravi’s removal as both the Governor of Nagaland and the interlocutor in the peace talks.

Officially paving way for appointment of a new interlocutor for Naga peace talks, R.N. Ravi, who had taken charge as Tamil Nadu Governor on 18 September resigned from his position as interlocutor in Naga Peace Talks and his resignation was accepted by the central government “with immediate effect”. The Ministry of Home Affairs took to the microblogging site Twitter to confirm his resignation.  Ravi submitted his resignation as the interlocutor four days after he took oath as the Tamil Nadu Governor. He had earlier served as the Nagaland governor for over two years.

In March, the NSCN (I-M) had remarked that Ravi’s role as an interlocutor had been “nothing less than disparaging and dismal”. This was after Ravi said in the Nagaland Assembly that the political negotiations had concluded, and that there was a need to move swiftly towards a “final solution”. It is worth mentioning that the Naga peace process had not progressed for the last two years due to the strained position between the National Socialist Council of Nagaland or the NSCN (IM), the lead Naga group negotiating with the Centre, and Ravi.